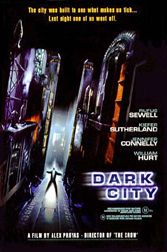 Challenging science fiction combines visually accelerated storytelling with the intercession of sinister improbabilities. If you want an audience to gasp you first need to make it think. “Alien,” “Blade Runner,” and Tim Burton’s original “Batman” all qualify. Luc Besson’s “The Fifth Element” and the first “Matrix” work magic. But Australian director Alex Proyas’ little-known “Dark City” gives them all a run. He locates a noir on a floating space world deprived of sunlight, slippery with girders, and run by an arcane race — children and officials with G-men hats — known as the “Strangers.”

A rasping doctor awakens John Murdoch (Rufus Sewell) and instructs him to flee what looks like a murder scene. Murdoch complies and finds himself in a surreal version of 1920s Chicago. At the same time he’s haunted by memories of a woman, Emma (Jennifer Connelly). Is she his wife or a cabaret singer? And why does he remember a place called Shell Beach? Proyas siphons energy from Murdoch’s survival instincts and romantic motivation from Emma. In addition to Connolly, Proyas recruited William Hurt and Kiefer Sutherland, a tribute to this ambitious and imaginative undertaking.