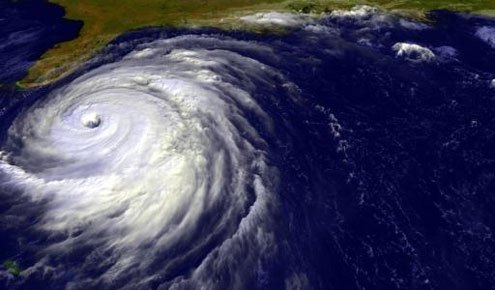 torms called Harold. Storms called Maude. South Atlantic hackles the Caribbean has known to fear for millennia. But the wired north is less laissez faire. Storms are now celebrities, presaged by agitated men and women who wave their hands over pulsating maps.

What the Weather Channel tracks scientifically was once wholly the work of gods. The Greek “katastrophe” described a din, and clatter was rarely a good thing. “Calamity,” from the Latin, may have begun with the word straw, “calamus,” and its breaking, as in the straw that broke the camel’s back. “Disaster,” from the Middle French, also filtered through ancient superstition: In Greek, disaster was a bad star.

The enlightened age is still seduced and humbled by astral mischief. What greater mischief than a great swirl pictured sitting atop an ocean before it swallows more water and wind and heads for land, which ironically kills it.

Excitement-oriented postmodernism invites even the modest of storms — depressions, they’re called — to make their mark, to live up to their forecasted dread, to create visual tragedies than sentimentalism can document and redeem, if not repair.

Once named, a hurricane is an “infernal” soap opera, Dante’s adjective. His dramatic Purgatory contained “unforgiving winds of unquenchable desire as punishment for [a sinner’s] transgressions.”

Though the secular world shies away from the infernal, it does apply a threat matrix, a terrorist term. Storms get grids and plots, their projected advance charted and made media-friendly. Increased wind speeds are forecaster’s appetizer. Force-rating chitchat gets woe-betide animus.

It’s the thrill of being in the path of something lethal, or being made aware of the lethal, without needing (in most cases) to do anything but watch. Hurricanes, peddled for show, are nature’s snuff movies, acts of war no one needs to assign to an enemy state or an axis of evil. In an era when the most enthralling weapons are those that can’t be tested in battle, storms help pick up the sublimated slack.

For centuries, their natural rivals were man-made: first fireworks and later weaponry. Fireworks fascinated because they were manufactured bad stars, would-be disasters kept in check by ingenuity. Weapons attracted for their din-making, but they were catastrophic by intent.

But when Oppenheimer’s A-Crew finally got around to New Mexico fission, man had no place left to stamp his abiding lust for lethal spectacle. Hydrogen followed atomic, upping ante of man-made disbelief. When it became clear man could terminate himself a thousand time over, enough was legislated into enough — at least for now. (See Kubrick’s 1964 “Dr. Strangelove” if endgame parody is your fancy, and in this case it should be).

Katrina, the grandest of traveling satellite blobs, proved her own point: That new-age calamity, detached from dose-and-dollop war, needs only two weeks to be as successful as “Survivor,” “American Idol” and “The Sopranos” put together. Do it right and you’re a hit for five years, even 10; after which you’re t an anniversary penned into every media book.

Awe is a winner, helplessness a tearjerker, government shortfalls a maker of accidental populism: Yes, a celebrity hurricane can do all that.

But only if you play into its hands by naming it, coaxing it with pictures, coating it with intent, making its movements those of an escaped convict, a serial murderer, eager to get back into character.

It’s all about investing a storm with character and making that character larger than life, which it is by any literal accounting. A public that once watched people burned at a stake for entertainment, roaring approval, can redirect its antediluvian blood lust if trained. Hurricanes, as ferocities for which man bears no direct responsibility, are vehicle s for displaced zeal. The naming of hurricanes has saint day roots, God tied to life-or-death celebrity. The secular state, riffing off an Australian meteorologist, turned the wrath female: Hurricanes were women scorned until correctness neutered the conceit (the first boy was undistinguished Hurricane Bob in 1979).

The word “celebrity” derives from “celeber,” or the act of repetition. “Fame” in turn arises from “fama,” the Roman goddess of rumor (Virgil described her as small and fearful at first, then growing larger and stronger). Ring a bell? “Fama” in turn derives from the Greek “feme,” to speak (no relation to FEMA, which has a category called “current disaster” on its website).

Roots burn backward like a fuse, and at the source of the annual lust for storms is the desire to generate and make legitimate talk of danger, potency, menace, mortality, harm, and ensure that talk go on and on, rumor included, until the sun rises in the east and the next day gets its marching orders.