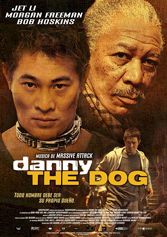 “Danny the Dog” is an imperfect confection with originality enough to cancel its considerable narrative shortcomings. Jet Li is Danny, an emotionally stunted and submissive man trained to behave as a martial arts attack dog when his metallic “taming” collar is removed. He is adopted, caged, and employed by Uncle Bart (the sparklingly mean Bob Hoskins), a Glasgow enforcer who lets him loose on uncooperative clients (“My own guided missile,” says Bart). When an assassination attempt on Bart sets Danny free, he finds himself in the reassuring keep of blind piano tuner Sam (Morgan Freeman) and his awkward 18-year-old pianist stepdaughter Victoria (Kerry Condon) — that is, until Uncle Bart comes knocking again.