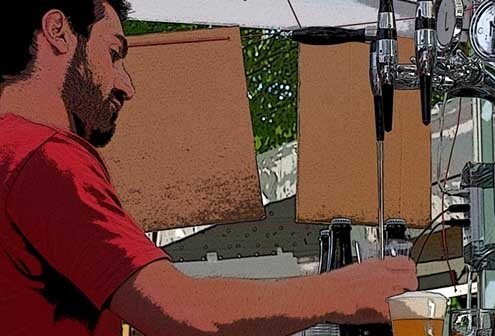 ’m putting aside my wine bias for a moment to talk about craft beer. It’s a movement that gained momentum in Italy after the country lifted a ban on home brewing in the 1990s. My own interest kicked up a notch about a year ago thanks to a beer lover I met while leading a wine tour through Lazio. Though Mr. X appreciated wine, beer was his true passion. I paired a beer with his meal and curiosity took me from there. Thanks Mr. X!

Mr. and Mrs. X gave my learning curve a boost by asking me to lead a custom tasting reserved for Italian beers. As with wine tastings, we started with lighter brews, ideal for steamy summer afternoons, and finished with stronger ones more suited to a nippy December day.

Here are my “favorite five” beers and styles from that tasting.

Retorto’s Latte Più: Belgian witbier aka biere blanche is a great opening move for non-beer drinkers. The style dates back centuries and is spiced with coriander, orange peel and herbs — depending on the brewer’s fancy. Latte Più adds grapefruit peel to the coriander and orange peel mix. The result is crisp, lively and zesty, a lovely companion to light seafood or steamed mussels. Give it a go with Vietnamese food.

Toccalmalto’s Skizoid: Here’s an Italian variation on American Indian Pale Ale (IPA). With an emphasis on variety, these highly bitter and hoppy brews are floral fruity, pine-tinged and sometimes even resinous. If you love bitter food and drinks (think broccoli rabe, straight up espresso, and roasted cocoa beans) this is your kind of beer. Toccalmalto’s Skizoid take has a citrusy side with a biscuit-like character. This is a dangerously drinkable brew — particularly with grilled or brined pork or chicken or blue cheese. The strange name comes from a 1969 King Crimson song (“21st Century Schizoid Man”) and the original album art is reproduced in green on the label.

Canediguerra’s Vienna Lager: No beer tasting would be complete without a lager. Lagers and ales are beer’s two ruling clans. Typically, they’re as exhilarating as a jackknife dive into the ocean in July, easy to drink and crisp. Lesser-known Vienna lager is undergoing a revival and that’s what I chose. Canediguerra’s version has alluring bread crust and floral scents and tastes of toffee and mild spices. I’d pair this brew with grilled steak every time — along with a dash of salt and pepper, hold the sauce. Or try it with almond biscotti.

Carrobiolo’s Tripel: The tripel is the Rocky Balboa of beers, a Trappist-style Belgian ale that struts into the ring with double-digit alcohol content, Christmas cake flavor (mostly fruits and spices), and a caramel sticky-bun finish. Carrobiolo’s Tripel weighs in at 9% ABV (alcohol by volume). It’s delightfully yeasty — honey, peach and spicy aromas — with a dry, warm finish. I’d have it with game birds of any kind (try duck breast), or with a triple-cream cheese.

LoverBeer’s BeerBrugna: Ever caught a whiff of stale milk? Meet wild and sour ales. Makers of these offbeat and funky brews add wild yeast strains or even souring bacteria to create tastes that are curious, adventurous, and often unique. In a talented brewer’s hands, tangy sour beers can be as intriguing as fine wine. Sours can shock you the first time around, which is why I chose LoverBeer’s BeerBrugna. Sweet damaschine plums are added during maceration, giving the beer a dark plummy aroma that offsets its mouth-puckering taste.

The first sip didn’t convince Mr. and Mrs. X. So we all dove into a bar of dark chocolate before the second round. That’s when the brew worked its magic, the chocolate’s sweet residue softening the beer’s no-nonsense acidity. Though Mr. and Mrs. X may not be sour ale converts, that “Aha!” moment was just what I’d been after.