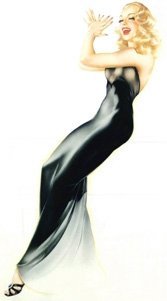 So, show us your moves guys!
T

here’s no shortage of the Latin language in Rome. Take 10 steps in any direction and quo vadis, ex voto, or the ubiquitous anno domini shows up on a wall. Latin lovers — at least the cocoa-eyed heartbreaker variety — are also plentiful. Yet in making the leap from Latin to Latino, Italians, for all their hot-blooded passion and dark complexions, lost their bearings. Satisfied with Rome’s old glory, Italy never jumped on imperialism’s New World bandwagon. With the exception of Mussolini’s Balkan and African adventures, it left the conquering and “Latinizing” to others. The Spanish-speaking Latin component, which worships dance, never made it to Italy.

In fact, for all of their flashy physicality, Italians lack a national dance persona. It’s no surprise that when the Salsa craze landed here a decade or so ago, Rome and the rest of Italy met it with open arms and swiveling hips. Which leads me to my characters.

Teresa and Franco had been seeing each other for about a month, so a salsa club seemed like an ideal place to meet. He’d just started taking classes, as had Teresa’s friend Sandra. It seemed like a perfect place for a group gathering.

At the club, Teresa and Franco were greeted by a blast of moist air and the sound of Merengue. They dodged arms and legs en route to the table his salsa buddies had reserved. There they sat, firmly planted, with mojitos sweating in their hands. The men’s eyes lit up at the sight of the couple.

Teresa scanned the room and finally spotted Sandra at the bar, bent over the counter as a swarthy Puerto Rican added extra maraschino cherries to her Rum and Coke. She joined her at the bar, and ordered a pair of shots for Franco and herself.

“We’re sitting over there,” she said, gesturing at the table, “I want you to meet Franco and his friends.” Drinks in hand, they sashayed across the floor, banging their hips together in synch to the music.

“Guys, this is Sandra —” Teresa began.

Sandra curtsied and drew on her straw, “Nice to meet you!”

The men’s eyes made for her plunging v-neck tank. A swatch of sheer leopard-print tulle peeked through in a halfhearted show of modesty. Shiny black pants hugged her voluminous lower half, tapering down to fragile ankles and strappy silver heels.

Teresa shot Franco a smile. “So, show us your moves guys! I thought you wanted to dance!”

They murmured that they’d wait for the next song or next drink, so Teresa and Sandra took to the floor themselves, Sandra leading with a strong step and unabashedly complex figures and turns. Teresa kept the pace, listening for the rhythm of the marimba: One two, three and — “So what do you think?” Teresa asked, catching her breath.

“He’s cute… not really my type, but he is yours after all,” Sandra chuckled.

They found the men with a fresh round of drinks. Teresa squeezed in between them and Sandra perched herself on the edge of the table, shimmying her hips and sending shivers up the mojito glasses.

“So?” She gazed at one face, then another, pursed her lips, and waited. A combination of terror and ecstasy flashed in the mens’ eyes.

“Hmm….” Sandra rose to her feet, winked at Teresa, and in a flash of acrylic-nail tips, gripped Franco’s forearm, pulling him to his feet.

He shot a kiss in Teresa’s direction and feigned a struggle to the dance floor. Teresa smiled, shooed them away, and watched.

Franco led Sandra stiffly at first, flailing towards the percussion line until Sandra took over:

“Ok,” Sandra sighed heavily. She counted aloud for several measures, and positioned his hand firmly on her lower back.

As they fell into the dance, his hand crept lower until it reached the swell of her behind. He guided her into the only figure he knew, pressing her body closely to his.

When the song ended, Teresa rose to applaud them.

“I really got it this time!” exclaimed a still breathless Franco. He aimed a kiss at Teresa’s cheek, downed a shot, and melted back into the crowd, a blushing Sandra at his heels.

Teresa slunk over to the bar, mentally erasing salsa dancers from her list, and ordered a martini. She watched Luis — or that’s what his tattooed forearm read — shake her drink in time to the music, his hips rolling inside his jeans, and decided to amend her ban. Puerto-Ricans, she decided, would be allowed.