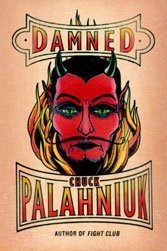 Pass the Great Ocean of Wasted Sperm and hang a left at the Gushing River of Steaming of Steaming Hot Vomit and, voilà, you come upon chubby but way-cool 13-year-old Maddy Spencer, “phone bank number 3,717,021, position twelve.” She is, quite literally, the telemarketer from Hell. Just when you thought Palahniuk couldn’t urinate any harder, he hijacks the impressionable soul of obese prepubescent Madison (the condom-strangled daughter of Brangelina-like Hollywood celebrities) and demands that she go on and on (and on) on about her new life in the dead zone.

That demons are largely indolent and that the mischievous dead defend themselves from roving nude giants by burrowing into their clitoris’ is, well, no surprise; Palahniuk is a latter-day Jonathan Swift when it comes to scoping out and embroidering all that’s down and dirty. But he’s also clever. To wit: “…The vast majority of telemarketing people who ring you up, they’re dead. As are pretty much all Internet porn models.” And “… the 855th time you fail to wash your hands after voiding your bowels, you’re doomed.” Satan as channeled by Chuck via “anti-Jane Eyre” Maddy spews filthy details on cue.

But Palahniuk’s typically outrageous mix of screwball satire and badass social commentary (conspicuous consumption and secular humanism are both bad news) eventually gets tangled in Satanic repetition and one too many walkabout visits to “The Swamp of Partial-birth Abortions,” another favorite Hell popcorn spot. The character-driven irreverence that gave noxious throb to the likes of “Fight Club” and “Invisible Monsters” has lately been loaned out to full-bore caricature, which can only take “movie star scion” Maddy Spencer and her Hellish screenplay so far.

That said, Palahniuk’s gross underworld exists to pillory the “precious, brief, messed up lives” of self-obsessed adults, with Madison Desert Flower Rosa Parks Coyote Trickster Spencer as a poster child for growing up too fast: Left to her own devices, neglected to death, she ends up in the Ellis Island of Hell. “All that Personal Identity Crap can take centuries to expire…” Moral of the story: Cntl+Alt+A can get you a way-total amount of input, but the wrong kind (including breast implants) can also get you deleted.