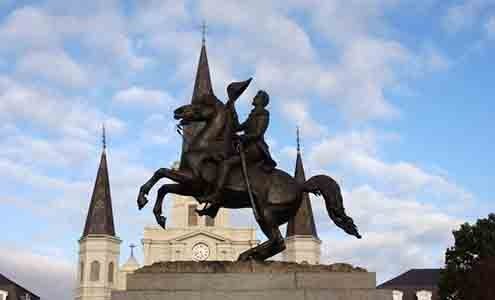 Statue of Andrew Jackson, general and president, in New Orleans' Jackson Square.
A

ncient Romans coined the term damnatio memoriae for the practice of erasing any memory of political adversaries and traitors to the state. In times of political unrest, the suppression of an image, a culture, or a political power served as a tangible, aesthetic way of asserting dominance and of setting a new direction. Bereft of paper and online trails, the ancient world was in a better position to rework public thinking with relatively minimal efforts. History could be eradicated.

Today, similar reworking is more nuanced, both morally and practically. In recent months, protests in New Orleans against the presence of statues honoring Confederate leaders — Gen. Robert E. Lee and Confderate President Jefferson Davis among them — have intensified, sometimes taking a violent turn. A grassroots organization called Take ‘Em Down NOLA recently lead an attempt to tear down a statue of President Andrew Jackson, now denounced as a 19th-century slave owner. While city government claims it seeks the removal of the memorials, it also says its efforts have been slowed down by competing lawsuits.

Take ‘Em Down NOLA demonstrated its impatience with the bureaucratic and legal process by organizing a late September march to draw attention to the immediate need to remove the statues. Enter former Klu Klux Klan leader David Duke, who vowed to resist the protest. On Sept. 24, the two sides scuffled in the city’s Jackson Square. New Orleans police made seven arrests.

In a previous column I argued that Confederate memorials, whether to men or battles, are dangerous because they can be perceived by some as government-endorsed symbols of oppression and because they silently confer a sense of belonging and glorification to extremist thinkers. Dylan Storm Roof, charged with nine murders in the 2015 Charleston church massacre, was emboldened by Confederate battle flag, which he posed beside. I suggested the way forward was not to ignore the Confederacy existed but to deter the honoring of symbols that drive people to unite in hatred. The key to this was and remains putting history in context.

I was there as the mostly white Take ‘Em Down NOLA crowd marched its way through the French Quarter. And watching made me believe more strongly than ever that a simple damnatio memoriae directed at the Confederacy gets society nowhere.

Concepts of history change. So do notions of progress, which now includes dialogue. Culture is no longer monolithic. What the bitter debate over the statues suggest is that to remove them is also to eliminate a conversation that desperately needs airing out. Erasing memorials doesn’t eliminate the cancer any more than tearing down statues of Lenin and Stalin excise Communist sympathizers.

In a 2015 episode of TriPod New Orleans, a radio show about the city’s 300 years of history, producer Laine Kaplan-Levenson noted that some 50 historic slave-trade sites remain unmarked in downtown New Orleans. Over all, only two markers point exist noting the city’s role as the capital of the ante-bellum slave trade. One is across the Mississippi River from downtown New Orleans and mostly out of view, the other situated across the street from where it should be.

But if damnatio memoriae is an outdated practice, as I believe it is, what’s the alternative? A national conversation comes to mind, one that places racism in a historical context. Instead of advocating for the destruction of statues and the abrogation of an unseemly past, we should be learning from the symbolic cues these monuments offer. For example, the Lee statue in New Orleans towers over the Lee Circle interchange. But the general’s back is intentionally turned against the traditionally black and low-income neighborhoods. This placement could serve as a powerful reminder of the city’s dark roots, but only of course if the statue carried a marker explaining Lee’s life. Without such an explanation, it’s a stand-alone memorial that teaches nothing. Tearing it down voids any possible lesson.

But those eager to create historical markers face their own set of obstacles. Telling the truth about historical figures can interfere with New Orleans’ tourism of distraction, debauchery, pleasure- and beauty-seeking. Slave-trade markers would need to be located in front of hotels and private properties. Tourists and the industry behind them want no reminders of ugly history — not when they’re busy celebrating Mardi Gras. Markers also face the wrath of vandals. An Emmett Till memorial marker in Mississippi is riddled with bullet-holes, the Mississippi Clarion Ledger reported earlier this year.

Marking the spot may not solve anything, I admit that, but it would at least represent a starting point. It would suggest a willingness to add layers of complexity and discourse to a history that’s so far been muted. It remains a better choice than trying to throw away a past that won’t be tossed.

In the song “Empire,” David Byrne sings over a swell of organs and victorious trumpets: “The weak among us perish/the strong alone survive.” But beneath the triumphal tone is one of rueful melancholy that acknowledges the limits of that battering cycle, and suggests another way.

The past and the future

By working hand in hand

By working hand in hand —