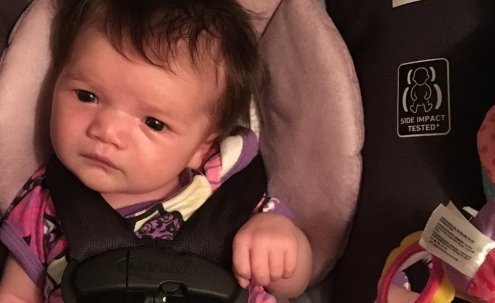 Will the author's daughter share her mother's love of language?
C

arne. It was my turn at the emergency room at a hospital in Bologna, and the male orderly butchered my name. Carne, of course, means meat, and I bristled at the potential innuendo. In retrospect, two decades later, it was probably a harmless mistake.

Crane, “Cra-neh,” I had corrected him, truncating my simple, one-syllable English name to better suit its Italian pronunciation.

I spent my junior year of college studying at the University of Bologna. That year set me up for becoming fluent in Italian. It was also when I fell in love with the language.

I lived with three Italian students, none of who spoke English, in a cramped apartment on Vicolo San Carlo, in the heart of the city. A few feet away was a cornetteria, whose scents lured us for fresh pastries in the middle of the night. Around the corner was a Conad grocery store, and across the street, an Irish pub and a local branch of the Italian Communist Party. It was a cozy, complacent world, and a perfect place to study.

My roommate Cristina, 10 years my senior and a law student graduating that year, spent hours in our room, reciting her thesis at a decibel just above a whisper. I got goose bumps listening to the sounds that seemed to enter my skin. Describing her love affair with a certain Francesco, she once said, Una cosa di pelle. A skin thing. Wide-eyed, I didn’t really understand what she meant — but I tucked away that phrase, along with many others, for later use.

I also studied my heart out. I’d always loved learning, and the Italian educational system made intuitive sense to me. Historical context mattered, and courses of study were naturally interdisciplinary. If you majored in modern literature, you also took modern history and modern philosophy, and you studied the Medieval and contemporary periods as well.

I remember standing in the foyer of the Lettere (literature) department, with literally a map with hundreds of courses in hand — feeling at once that the world was my oyster. I ended up mostly taking literature and history courses, but I sat in on anatomy and law lectures to expand my vocabulary.

My curious hospital visit also gave me a few new words. Ottite, sinusite, bronchite, the doctor pronounced. Ear infection, sinus infection, bronchitis. I’d never been sicker, but what stayed with me was the family of rhyming words.

That year Italy won an important World Cup game, and since I’m not much of a sports fan, I spent game day at the library, reading St. Augustine’s “Confessions” in Italian. When I walked home the streets were erupting with joy that somehow matched my own celebration of learning and language.

My monastic study habits paid off. Two years later, I was back in Italy on a Fulbright, and shortly after that, I met my boyfriend, himself a scholar of English literature and language whose command of the language was such that his students translated Chaucer into Italian.

But we lived in Italian — in a studio apartment lined with books, within earshot of Romanesco. He taught me Italians’ love of the diminutive. Letto became lettuccio, amore, amoruccio, and so on. The cliché that you don’t really know a language until you fall in love in it was true.

Since moving back to the States a decade ago, I’ve had few opportunities to use my Italian, but occasionally I meet native or fluent speakers, with whom I break into conversation that still feels inexplicably natural.

I’ve also pulled from my grab bag of consoling Italian phrases. Una parte di me se ne va, I told myself, after my mother died. A part of me is leaving…

Recently, I’ve started speaking to my newborn, Julia, in Italian. It’s too early for language acquisition, but she can still absorb sounds, and Italian has many offerings. Apri la boca, I’ll say, or dammi la mano. And of course, my all-time Italian favorite: tesoruccio: little treasure.

Who knows whether Julia will inherit my love of Italian? I can report that the other day when she was crying in the car, I cranked up the volume of Madama Butterfly playing on the radio. The famous line Bimba, bimba, non piangere came soaring by, as if to save us. Little girl, little girl, don’t cry. Two minutes later, like magic, she stopped.