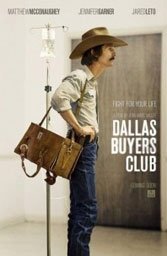 In “Dallas Buyers Club,” Quebec director Jean-Marc Vallée asks Matthew McConaughy to flesh out a difficult character and give character to a brutal disease. McConaughey responds with a commanding, man-on-a-mission performance that is a career best. McConaughey is Ron Woodroof, a licentious, rodeo-loving Texas loser who in 1985 tested positive for HIV, at the time a bewildering scourge to both victims and the medical establishment (portrayed here as opportunistic at best). In denial at first — “Ain’t nothing that can kill Ron Woodroof in 30 days” — the drawling, homophobic Woodroof responds to his end-game diagnosis by downing truckloads of illegally obtained AZT, the first and dubiously okayed AIDS delaying drug. But when the “cocktail shit” seems to sink him faster than the disease, he rebels against his marching orders, reading voluminously and taking up the cause of protein-based treatments.

A hustler at first, Woodroof morphs into a globetrotting anti-FDA crusader, helping all those who can pay for cheaper alternative treatment, and some who can’t. Ron’s unconventional, life-prolonging therapies become the backbone of a $400 membership in the Dallas Buyers Club — much to the chagrin of the AZT-boosting FDA and various by-the-book government agencies. His improbable DBC partner is Rayon — the androgynously stunning Jared Leto, a transvestite who bigoted Ron first loathes but later supports. His ally is a woman doctor named Eve Sacks (Jennifer Garner, determined but miscast), who also gets around to doubting AZT and, more importantly, comes to embrace Ron’s improbable crusade.

While this is very much a buck-the-system, drug company greed story fueled by the scarring legacy of AIDS, it is given passion and compassion by McConaughey, who underwent a decimating physical transformation to take on Ron’s gauntness of body and boldness of mind. Ron and Rayon are superbly tuned and emotionally fleshed out anti-heroes. In fact, the film drags only when Leto’s Rayon exits the storyline, leaving only a sentimental denouement.

McConaughey’s Ron has much in common with Christian Bale’s 2004 portrayal of the skeletal Trevor Reznik in “The Machinist,” except that Woodroof has wit, wiles, and attitude. He’s doomed man made whole by the civilizing elegance of defiance.