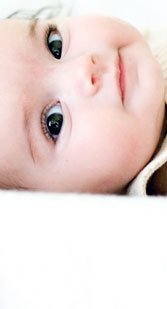 An infant is about eyes.
T

he first thing I learned is that parenthood is full of disagreement. For instance, my wife and I have an ongoing bet about our daughter’s eyes. She says they’ll be green, like hers; I say brown, like mine. We each see what we want to see. She sees brown with burgeoning flecks of jade and emerald. “The color of freshly pressed olive oil,” she puts it. I see warm, swirling eddies of mud-brown. The eyes take a while to settle, like agitated pools of water, so there will be time to hedge our bets before they come into focus.

Another thing we can’t agree on is her astrological sign. Or, rather, its import. Technically, she was born a Leo. We all know how a Leo is supposed to act: proud, loud, the center of attention. The Sun, in short. Fixed fire and all that. So if that’s what you’re looking for, it’s pretty easy to find in a newborn. They aren’t yet overly altruistic or preoccupied with other people’s problems. It’s just me me me. That’s not astrology, though, it’s biology. But biology is boring, so there’s a lot of talk about star signs now. It’s more fun, like cartoons.

Which means I’ll have to get over my Disneyphobia, too. One day there will be no choice but to take the family to see the latest animated schlockfest at the local megaplex. I’ve made a point of avoiding anything Disney for most of my adult life; now it’s coming back to haunt me. I foresee a reluctant Pax Disneyana in my crystal ball.

These are minor points, however, in a catalogue of exciting new scenarios. Despite the harrowing early weeks of hair-pulling quandariness, including one all-nighter after which we ended up in the hospital (needlessly, I might add), it’s been a breeze. Well, not a breeze exactly, but my imagination had prepared me for much worse.

Like Shalom Auslander in his memoir “Foreskin’s Lament,” I had envisioned an endless parade of nightmares commencing with the knowledge of pregnancy and culminating in some horrible mutilation in the birth canal. Auslander is plagued by the memories of God he can’t abandon as easily as his belief, a God who would twist the knife a little further just for the fun of watching him squirm. A God who would murder a happy, healthy new family in a car accident on the way home from the hospital.

The moment they told me everything was fine with my wife and my baby, I breathed a sigh of relief and set out imagining everything that could possibly go wrong for the next 30 years. I could almost hear myself saying, “Watch your step getting off the ski-lift!” I don’t even need the memory of a deranged, psychopathic deity to spur me on.

Lesson Number Two: worry will accompany you for the rest of your days.

But there’s good news, too, and lots of it. Melissa is a vibrant talker. At three months her mouth just opened up and all sorts of new sounds came tumbling forth out of nowhere. Every week there’s a new one in her showcase of sounds. She has discovered a language, albeit a primitive one, with which to express her ever more complex desires and streams of thought. It’s hard to imagine thought having a beginning, but I suppose it does. (As far as I can tell, it’s in the stomach.)

She’s always talking away, especially when we’re having a Serious Conversation About Important Things. It’s as if she perceives the gravitas of the moment. Then she’ll just begin nattering, squawking, whatever the word for what she’s doing is. “Ngigoo. Aieee! Gwawngh. Come on, you two, lighten up!” When that happens the seriousness fades from our faces and we join in the mirthful nonsense. What else can you do?

There I go again, scribbling captions beneath her photos, attributing complex modes of reasoning to an infant who is still working out the ability to grasp her rattle. I’ve learned that’s one of the things you begin to do as a parent. It’s a bit like lolcat graffiti, the Internet craze of putting uproarious human slang into the mouths of kittens. “I can has wet daipers!” we can (almost) hear her saying.

But back to the eyes. I spend a lot of time staring into them, admiring the whites not yet crisscrossed with red veins like a miniature subway map of New York. They look back directly into mine. Sometimes they hold my gaze for five or ten minutes. What can the brain behind those enormous orbs be thinking? I’ll never know the answer to that because no one knows the answer. Even Melissa won’t remember anything from before she is three years old. All of this tender ogling is postmarked oblivion. That’s just how it is.

We take photographs and write poems, hoping to preserve some glimmer of these times. Whatever the record turns out to be, it will be pockmarked and scarce and barely readable by our future selves. The innocence and wonder of these moments will drain away with time. That’s just how it is.

No technology on earth, no art or artifice can plug that leak.