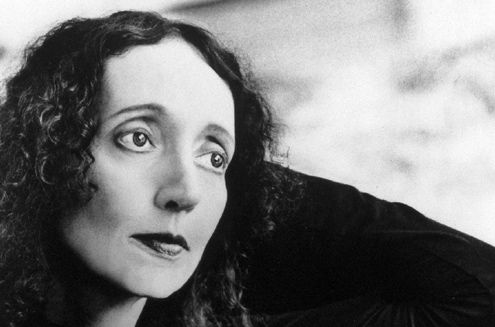 hat the devil’s the matter with Joyce Carol Oates?

She may use wild and brilliant variations. But she’s been hawking the identical daughter-victim story for over forty years. What’s her problem?

Answer’s in bold within her latest title: “The Gravedigger’s Daughter.” What hope for this child, Rebecca? None. That’s the point. Oates’ mainly female leads are, above all, condemned daughters. From page one their doom lurks like a holograph.

Gravedigger Jacob Schwart is a grotesquely Dickenesque cemetery worker. He’s every-which-way Bad-Dad: one of Oates’ career-long, and repetitive character types. Rebecca’s future and tragic life is writ in stone by her father.

This malignant-father plot fix has marked, and marred, Oates’ work. She’s got a blogged-in-heaven language flow, and a unique emotional compass. Too often and too heavily manipulated: to feature her father/daughter tale.

“Gravedigger” begins with Rebecca Schwart in midlife crisis. Only in flashback do we see Jacob save his family from Europe’s Holocaust. They land in New York Harbor, during The Great Depression. To survive, this European math teacher becomes cemetery caretaker. At the hands of another writer, Jacob might’ve gained protagonist status. Even had pathos. Why not? His Nazi nightmares, grinding Depression poverty, and immigrant culture shock are certainly among the charged events in our history

But having exploited these momentous issues as background filler Oates simply sets them aside. As she transforms Jacob to deranged Dad. Who shoots his wife and kills himself.

If he narrowly misses offing Rebecca as well, he’s been a success in creating her dysfunctional persona. A classic Oates protagonist: emotionally crippled child-woman. Prey to the psychopathic males haunting our national landscape.

Biographers agree: Oates herself has enjoyed a sunny personal life. Yet the demon-father refrain loudly dominates her work. Terrorist or plain absent, these men condemn their daughters to incandescently insane lives.

Look at Marilyn, in “Blonde.” Trapped in childhood terrors and tinsel town’s unrelenting sexual and commercial exploitation Marilyn has screaming-aloud dreams. This novel could’ve shot down the culture that produces eye-candy people as consumer sweetmeats. Instead, Oates riveted on Marilyn-the-addled-child-woman, as much self-destroyer as destroyed.

Just as Oates can’t resist attacking the warped male parent, in novel after novel. Till boredom do us part.

So how does she keep a readership?

She’s a lavish, and hypnotic wordmonger.

Also a writer with a made market. Those ballistic accounts of sex and violence meet a swelling public appetite for savagery, strong emotion and exacerbated personality types. They perform within roiling plot twists, vast character lists and realistic social minutiae. Storytelling worthy of the great Victorian novelists.

Last — not least — JCO inevitably references one, or more, of the explosive, and reader-engaging themes of our times: race, religious fanaticism, the Shoah, rape, revenge, genocide. Without anesthesia, she probes the unhealed wounds in our collective consciousness. Then, with unpleasant ease, she makes them disposable stage props.

The recent “Black Girl White Girl” is a searing probe of race. Oates’ extraordinary intuition for emotional nuance and her flamboyant writing drag us into the downward spiraling madness of her B/W protagonists.

Then she pulls the plug. B/W issues forgotten. Equally forgotten her hot-button side plots. The book’s PR insists on “the atmosphere of the post-Vietnam era.” Oates is about as interested in that national drama as in a one-way ticket to Mars.

Then what’s the B/W tale really about?

1974. Black Minette Swift and white Genevra Hewlett Meade are freshman roommates at Schuyler College. Fifteen years on, Genevra writes this ms “text without a title.” To tell the B/W tale “in the service of justice.”

Minette insanely sets her own fiery pyre. Genevra remembers: “I was the one who could have saved her, yet I did not.” So is this memoir written to do justice to Minette?

Think again. In a 17-page epilogue Genevra dumps her guilt on Daddy. That does explain why this 2006 novel about ’74 was fictionally “written” in ’90. Oates chose a year when Genevra’s imprisoned father, Mad Max, is still plausibly alive. When he can still read what happened, and accept his blame for Genevra’s life.

Not that Genevra’s forgotten the horrendous fire and Minette’s death. But other memories are stronger. For she’s never forgotten or exorcised the Daddy obsession.

Not surprising. Neither has her author.