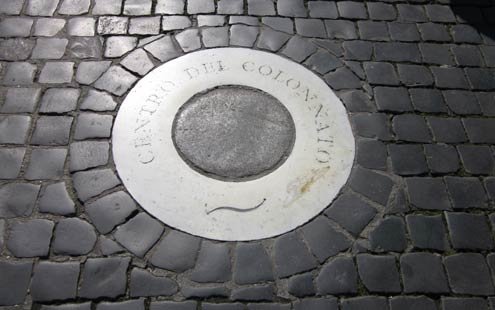 The center of any place depends on what you seek.
B

y the end of my two months in Cervinia, a tiny village in the Matterhorn’s shadow, I craved civilization. I would miss the perks of Alpine living, including the view from my balcony, and how the towering mountains glowed on moonlit nights. I would miss the fresh mountain air, the locals I befriended, the skiing, the food, and the solace.

But that’s not everything a girl needs. A week before leaving, I was chatting with friends over Skype on an Internet connection so poor they could only catch every other sentence. “So,” they said, “are you sad to leave?”

“Absolutely,” I replied. “I’m going to miss it up here. But at the same time” (the connection cut out for a moment, as if to underscore my point), “it’ll be great to get back to civilization.”

The incredulous laughter from the other end- really? Rome? civilization? — could only have come from those who actually live in Rome. Or, I thought to myself, from those who have never left the city to spend two months in the mountains.

After all, life was different here.

In Cervinia, for example, we couldn’t buy meat. There was no butcher in the little community, and so you had to rely on the little market, the owner of which sometimes made runs down to a neighboring town to buy shining slabs of beef. By the fourth protein-less dinner, I found myself thinking about the conveniences of home. Say what you will about Rome, but at any given point, there are a dozen meat-selling markets and butchers within a 10-minute walk.

Not that all of the differences left me missing the capital. In the Valle d’Aosta, I fell in love with the handcrafted nature of living. As I skied down to an agriturismo and ate cheese, and polenta, and meat, and sipped grappa, all created there at the farm. I attended a fair in Aosta and wandered through hundreds of artisan stalls showing off their hand-carved wooden furniture and clocks and sculptures and flower bouquets. I saw one man busily scraping wood into dozens of pairs of wooden clogs. I thought of the one fair in Rome everyone knows, the Christmas fair at Piazza Navona, and how the stalls explode with made-in-China souvenirs and toys and tchotchkes.

In Cervinia, I soon met everyone in my neighborhood: Gianpaolo, the ski shop owner who’d moved here from Rome; Eva, the girl at the café who came here from Torino to marry her policeman boyfriend; Pippo, the bar owner, who’d lived here for almost 30 years and reminisced about the good old days, back when Cervinia was hot and Beppe Grillo was knocking back shots at Pippo’s discoteca. “Ah, small town living,” I’d think to myself each time I was greeted by name while walking past their storefronts. And I’d think of the anonymity I wore in Rome each time I passed down a busy street or boarded a bus.

And then, last week, I returned to Rome, the city I’d been alternately missing and dreading my return to.

In Cervinia, the village center is so small, you can cross it in about three minutes on foot. When I returned to Rome, the streets dazzled me. The number of them! Their size! The traffic! “Back in civilization,” I thought as I picked my way through a momentary gridlock at the bottom of my block, three cars and a scooter all trying to go in opposite directions at once-a difficulty without a traffic light in sight. “Kind of,” I added silently, picking my way across rough-hewn cobblestones and carefully stepping around a pile a dog, and his oh-so-civilized owner, had left as a gift for pedestrians.

I wandered through Monti and marveled at one street that (how had I never noticed it before?) was made up of, mainly, artisans’ boutiques, not a chain store in sight. Behind a glass display window of gem-heavy rings, I spied a workshop table with metalworking tools. “Si, tutto e’ fatto qui, da noi,” the woman said, her expression one of near-amusement that I even would ask whether the items were homemade. A few doors down, a young man and woman sat at a table, fabric strewn in front of them, going through a book of fashion designs for their next creation.

When I ran errands, the young man at the tabaccaio was even more thrilled to see me than usual. “Bella! Ma dove sei stata?” he asked, wondering where on earth I’d been the past few months. My eye doctor greeted me with a kiss on both cheeks, and her assistant found my file without my reminding him of my last name.

I returned home and started scrubbing mold from the shower-mold that had accumulated because the shower leaks everywhere, and, since fixing it would require the time-intensive headache of arranging for a plumber to come, and then order parts, and then return to fix it with the parts, but probably still having to put the complete repair off for one reason or another, and all the while not being able to shower in the meantime-the leak hasn’t been fixed.

It’s about then that I remembered my friends’ laughter when I referred to Rome as “civilization.” And I shook my head, smiling. Maybe Rome and Cervinia aren’t so different, after all.

And maybe that’s why I love them both.