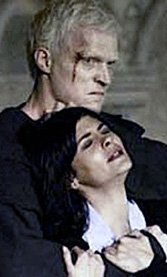 Revived and on loan, Silas might make a credible James Bond villain.
H

ere’s what’s good about “The Da Vinci Code,” the movie.

Those who can’t imagine it — or wouldn’t — see where masterpieces come to rest, in dull rooms that empty out at night.

The Mona Lisa, the Last Supper, telekinetic colors on a mission from God. Imagine getting close. Good news: you can.

Castles, yes, and acres of land whose lineage is folklore itself — not centuries, millennia.

There’s Norman and Romanesque, also a bounty of nervous gargoyles glaring over foliage with ruined Gothic eyes. Good, and startling.

So there you have it.

As a tourist roadmap, “The Da Vinci Code” gets a Michelin Red Book star: worth a detour from daily drudgery. “What an amazing film,” a Rome waiter tells me, excited as boy tossed the car keys. He’s been thrillingly undone by mystery, snared by conspiracy.

He also went with his fiancé, who is shockingly beautiful. He can’t believe his luck. Is it that girls rule the earth? It’s less a question than a declaration. The movie, suddenly, is about a couple: their great escape.

I have another friend, less distracted. Weeks ago, she helped assemble a panel of esteemed journalists and intellectuals to help debunk the film’s theories, such as they are. Priests and promoters of Vatican Natural Law attended. Rome is a good pulpit from which to denounce authors as the infidel servants of a literary kleptocracy that rearranges history for profit.

All so silly, though, since seeing isn’t beholden to believing.

“The Da Vinci Code” is so numbingly and literally incredible that left to its own devices it would self-destruct in 60 seconds. But its devices are not its own: Dan Brown’s book has sold 50 million copies.

His movie, made by Ron Howard, will be less profligate (opening weekend aside). The premise is jagged, the actors lacking in conviction, and a script’s most sacred trust — character-building — dumbly profaned. A story line intended to glorify Mary Magdalene treats its only female character with comic aloofness, giving her lines such as, “It cannot be true!” Audrey Tatou sounds like a spoiled bistro waitress who’s been told she won’t be getting that promised day off after all. Awe is not her strength. Excuse her, though. The secular French don’t see themselves in Joan of Arc.

But let’s continue on the side of good.

That’s good. They do come in varying shades of orange and blue. And sirens squeal differently. Police deck out by countries. No need, though, to discover that firsthand.

Bless Ian McKellen, devotee of Ibsen on the British stage: he frantically imposes some wit into the humorlessness. Prodigiously talented, he helps but can’t win. Ah, but there’s a good side even here: go see McKellen on the West End. He’s there.

Opus Dei aside, they’re not an easy bunch. Brown calls his agent Fache, two accents away from fâché, which means angry. Don’t ever get on the wrong side of the flic; they can and will hurt you. Civil liberties are unfashionable in France. Imagine getting close. Then don’t.

Finally (dare I put this in the plus column), behold a self-mutilating albino monk with German-Aramaic-Italian-Welsh accent bent on do-good assassination while hissing in Latin on a cell phone.

The characterization (courtesy of Boris Karloff wannabe Paul Bettany) could easily spawn a video game of its own: Killer Monk, say, or Silas Assassin. But the rights to Silas are owned by the possessive Mr. Brown. Silas is also fictionally dead.

Pity. Revived and on loan he’d make a credible James Bond villain, since the Bond franchise also munches on scenery and could use a Latin-stammering nun-killer as a foil for some naked Mona groping for a greater truth. Does that albino monk have a crucifix in his pocket or is he just glad to see me? My advice: don’t ask.