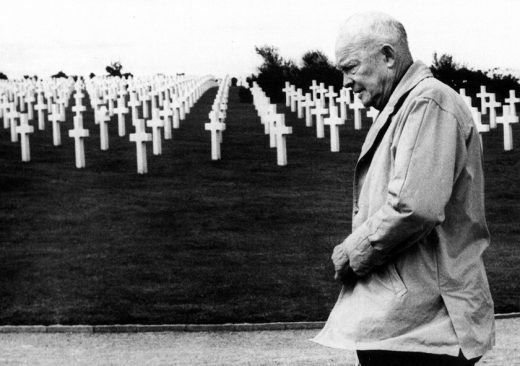 ’m still moved by D-Day, the June 6, 1944, Normandy Beach landings, and their annual commendation rites. I’m humbled by the sacrifices, whether made by a president’s son, Brigadier Gen. Theodore Roosevelt Jr. (who died that day), or the lowliest of conscripts, who fought their way to the bloodied shore by the thousands. I’m inspired by the daring it took to make the landing, by the cunning it took to plan it, and by the grit summoned to carry it out.

I love seeing frail old men bent over their canes and medals. I’m fascinated as well by the myth making and un-making D-Day elicits, as military scholars and archaeologists continue to sort through the fog of war. Watching leaders — like ‘em or not — remembering great moments also intrigues me.

I’m inspired by the daring it took to make the landing, by the cunning it took to plan it, and by the grit summoned to carry it out.

But on every anniversary, and none more than this year’s, I feel obliged to draw attention to some historical details that get lost amid the deserved praise for the men who stormed those machine-gun lined French beaches.

Normandy may have been the greatest D-Day, but it was not the first.

My great-uncle’s World War I letters show that the terms “D-Day” and “H-hour:” were not new.

D-Day 1944 was deeply influenced by the previous war. Allied commander Gen. Eisenhower, who was not in Europe for World War I, and Gen. George C. Marshall, who was, learned critical lessons from the so-called Great War.

After that first world conflict, Eisenhower compiled a comprehensive study of the massive four-year struggle for the American Battle Monument Commission. Marshall cunningly applied some logistical lessons learned the hard way in 1918 to Normandy.

Both Eisenhower and Marshall were schooled by the World War I battle of the Meuse Argonne, which in many respects makes D-Day look puny. Lasting from September 26 to November 11, 1918, it remains the largest battle in U.S. history. In all, 26,000 died, and the Meuse-Argonne cemetery contains 14,286 graves (there are 9,380 at Omaha Beach).

The common American legend has it that D-Day’s show of American might and resources was the turning point in World War II. In U.S. eyes, with the exception of the brief setback for the Battle of the Bulge, pushing from Normandy to Berlin was a straight, if tough, shot.

In reality, the war’s balance of power had shifted several years earlier, and there had been more than one turning point.

One in particular was 1942, the Battle of El-Alamein, in which the wily German general Erwin Rommel got his comeuppance in Egypt from the wilier British. Another was on the Eastern Front, where the wiliest general of them all proved to be the Russian winter, which in essence helped kill the Nazi advance at Stalingrad in 1943.

For most Americans, the Eastern Front is a footnote. Yet most of Germany’s troops fought in the East, where over a million Germans died, compared to just over 100,000 on the Western Front. Realistic German leaders knew that Stalingrad was the death knell.

None of this minimizes the importance of the Normandy breakthrough in both strategic and propaganda terms. The 1944 landing also dealt an immense psychological and military blow to the already weakened German war effort. It generated optimism among the Allies and sent a stern warning to Japan.

But D-Day had a myopic effect. Using the heroic landings as leverage, some Americans believe war is simple and enemies easily defined.

The Soviet contribution to the Allied victory is unwisely overlooked during D-Day celebrations. This diminishes the truth that an alliance, and not just the U.S., stopped the Third Reich from achieving its ends.

The Allies may not have been able to penetrate Normandy Beach defenses had they been manned by the best German troops. But those crack troops were deployed on the Eastern Front. The Soviets, in turn, could not have won their “Great Patriotic War” without equipment from the American Lend-Lease program.

It is easy, and dangerous, to forget that winning sometimes means joining hands with unsavory partners.

Would there have been a Vietnam War had America continued its early support of independence-minded Vietnamese leader Ho Chi Min? He begged the U.S., which he admired, to reason with the hardline colonial French. Washington didn’t listen.

The Allies may not have been able to penetrate Normandy beach defenses had they been manned by the best German troops. But those troops were deployed on the Eastern Front.

D-Day has lulled America into thinking that its technical and material superiority, if massively applied, is invincible. But Vietnam and Afghanistan were not Europe in 1944.

Americans somehow imagined happy French girls would always gather along flag-lined road and boulevards to greet the liberators. But any joy in post-Saddam Baghdad was muted and short-lived.

Americans often belittle European reverence for NATO and the European Union. Without a recent war fought on its own soil, Americans fail to comprehend that those battlefields, those now-overgrown bunkers and trenches, are actually in someone’s backyard. Europeans are still digging up dangerous undetonated World War II bombs to this day.

On D-Day’s anniversaries, America portrays itself as the country many wish it to be — a fresh, idealistic, wealthy democracy eager to make sacrifices for the greater, and common, good. And it really was that way on June 6, 1944. But it was not the only way.

The men who fought there probably wouldn’t have it any other way.