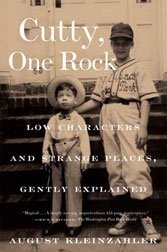 San Francisco poet and sometime social critic Kleinzhaler revels in the role of roguish, hard-drinking North Jersey Jew with a Pit bull’s contempt for maudlin poseurs such as Garrison Keillor, a purveyor of “comfort food for the Philistines,” and one-track commercial America, sucking from “a teat with a Nike swoosh and dripping Diet Coke.”

These prickly but graceful essay-recollections begin with his Fort Lee roots (among “the Kiev bog contingent,’ as he calls it), extend to reporting assignments (riding a bus in San Diego, lunching with “legendary self-mythologizer” Allen Ginsburg in New York), movie-bashing (he eviscerates “Leaving Las Vegas” and “The Piano”) and the smell of saliva (a rousing and arousing essay called “Eros & Poetry”). They conclude with the stunning title story, a tribute to his wayward gay brother who committed suicide in 1971 (“Cutty, One Rock” is Cutty Sark with a single ice cube). Midway through much sex and wreckage is “The Zam Zam Room,” as good a homage to a bar and its customers as you’ll find in print (owner Bruno is “a swarthy Assyrian version of Edward G. Robinson.”)

Though often self-deprecatory (“I looked like the dog,” he says of his youthful appearance), Kleinzhaler’s prose attains both altitude and attitude. A memoir about his friend the poet Thom Gunn says Gunn criticized his writing “if he detected mannerism, slackness, want of real subject matter or its honest treatment…” Gunn would have been pleased. No slackness here.

It’s replaced by originality of vision. On seeing the Grand Canyon for the first time: “Nothing quite prepares you for it. Terror, that’s what it’s about. Not the hundreds of scenic photos, paintings, film clips. It will not be colonized psychologically. It defeats language. It defeats art. It is the most inhuman spectacle I have ever been confronted with.”

Little defeats Kleinzhaler, who uses words such as “toney,” “queer” and “chary” as readily as “dickheads,” “cunts” and “Eurotrash motherfuckers.” As a kid, his brother called him obnoxious (which he sometimes is). The sheer sound of the accusation undid him. “If there were words as punishing as this, I wanted my quiver to be full of them.” It is.