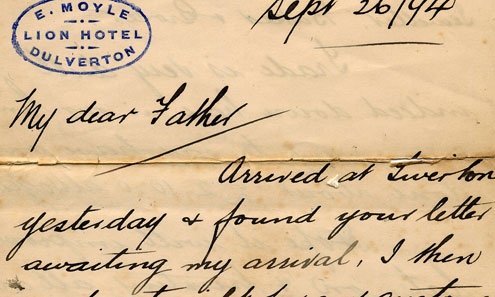 Cursive: a mark of education, grace and once necessary to all written communication.
I

n second grade, the classroom walls were lined with a decorative border of swirls and curlicues that towered over our heads like a commandment from on high. It was the alphabet, in cursive.

Learning to write letters in interconnected flowing loops was a rite of passage, a step into adulthood. Moving one’s small hands from blockish movements to circles was an exercise in dexterity, physical control and coordination; learning to properly grasp a no. 2 pencil part of the challenge.

During instruction, the teacher would draw three lines across the length of the chalkboard with a special bracket-like chalk holder. There, she would write a paragraph for us to copy at our desks.

Every capital letter seemed like a mountain, every lowercase letter had too many loops. The words needed to link together with a small little tail at the end of each letter and all of it had to stay slightly angled on the line.

Each word and sentence was an arduous undertaking, and copying the paragraph was a monumental feat.

We would spend hours and hours mastering the skill because it meant so much.

More than just a way to write words, good penmanship was a mark of a proud citizen and a good student. Like a crisply ironed shirt or shined shoes, it was part of ones overall academic appearance. Sloppy penmanship equated a feeble and disorganized mind, even outright disrespect.

But, like languages that only elders speak and disappear from disuse, skills that used to connect the basic fabric of society and culture can vanish. Sometimes it happens so silently that no one seems to notice.

It was a day last week that I became acutely aware of such a change.

I was responsible for handing out certificates at an annual board meeting and since I was signing as the presenter, I needed a different script for the name.

I took the awards to the office and figured, with some bias, that my female colleagues could help. One of them, I was certain, would have an easy flowing handwriting to add a distinguished touch.

Molly offered happily, declaring with some pride to have good penmanship.

She took the black pen in hand and wrote the first of the names with studied intention: Bill Blaire.

But she wasn’t writing in script. She printed. When I told her I meant script, she replied, “Cursive? Oh, I don’t do cursive. I didn’t think there was a big difference.”

Sheryl came to join the problem-solving session with some writing samples, but the capitals themselves were printed; the rest was fits and starts of cursive. “That’s the best I can do. Maybe you should just type the names in some way. Everyone just types now.”

Within earshot, Kristen piped in. “I used to have good handwriting. Let me try, what name do you need?”

“Okay, just a second,” she said, pausing. “Let me Google how to make a capital B.”

I quietly gasped hearing her words. It was then that I knew it was over for cursive.

As Kristen copied from the computer screen the “B” then moved to the small “i” Sheryl piped in with advice. “That’s good. But they should link together. All the letters need to link together.”

Kristen struggled to write the name much the way I had when I was seven years old. But the women gathered were a long way from primary school. My heart sank.

At that moment, I didn’t care about my flimsy certificates. Instead, I flashed back on the beautiful script of the nations historic documents that were posted in my classroom for inspiration: The Constitution and the Declaration of Independence. I recalled the commanding flow of Alexander Hamilton’s signature and how it seemed to embody the man himself.

But right before my eyes, the torch of history was being passed. I saw it all passing away into the night.