Curse me till I’m dead 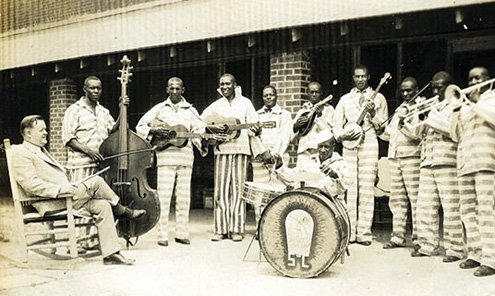 The Parchman Farm penantiary in the 1930s: Bucolic images failed to show the misery.
T

he prisons and jailhouses of the American South have long been seen as places of dysfunction and humor. According to the stories we tell, they’re where the real characters of our fair nation are locked away, cracking jokes and inventing hijinks while sweating away humid Bible Belt days in shackles. Southern cells have entered our consciousness as places that no one dares go, unless film or song brings their violent and backwards charm to life.

Consider these classic stories: in “My Cousin Vinny,” Joe Pesci ends up in an Alabama prison after being found in contempt of court for wearing a leather jacket and speaking “Yank”; in “Down by Law,” Roberto Benigni learns to mangle “I scream / you scream / we all scream / for ice cream” with his Italian swagger in a New Orleans jail; and, of course, Mississippi-born Elvis sings about prisoners who’d rather dance than make a break for it in “Jailhouse Rock.”

But pop culture doesn’t get to the reality of Mississippi prisons — let alone what goes on in the national penal system. What happens inside is comfortably ignored.

Up until five years ago, I’d never seen a prison, or even realized I was looking at one. Then you end up somewhere out of the way, in a place where no one usually goes, and understand what’s in front of you: a vast, windowless expanse, a container for hundreds of invisible lives.

If you drive Highway 49 in Mississippi you run right into Mississippi’s infamous state penitentiary at Parchman. It’s where the opening sequence and escape scenes of “Oh Brother Where Out Thou” are set. Drive north from there and you run through a small cluster of West Tallahatchie county’s historic small towns. You’ll see signs for Money (where in 1955 14-year-old Emmett Till allegedly whistled at a white lady before he was brutally lynched and tossed in the river), Tutwiler (where W.C. Handy first heard the blues while standing at the train stop), and Sumner (where the Till trials were held). You’ll drive past a couple of public schools, which flank the highway, and then right into another massive prison run by the Corrections Corporation of America (CCA), a private company. Literally sandwiched between two prisons a cluster of towns raises their children.

I recently had occasion to work on a project in these communities. I conducted several interviews. My most interesting conversations were with two high school students about to graduate. I asked them what it was like grow up and attend high school between two prisons. Did it have a psychological effect? Or was that just an outsider’s reaction? Tears began running down one young woman’s face: “No matter how hard we work and how big our dreams are, we’re told over and over again that those prisons are here for us. We’ll either work in them or end up living in them. That [means] me and my friends, our families. All I want is for that not to be true.”

This sentiment is easily confirmed: 10.7 percent of Mississippi’s adult population is currently in prison, and the number rises to approximately 14 percent among African Americans (jumping again among males). West Tallahatchie towns depend on prisons for employment, while simultaneously being torn apart by a system that routinely throws black men into prison for non-violent crimes (and crimes that white men are known to commit more often). What’s more, private companies like the CCA (which has reportedly seen its revenue grow by 500 percent in the past decade) often have state contracts that stipulate occupancy requirements. In other words, regardless of actual crime rates, the CCA has agreements with local governments that their prisons must remain between 80 and 100 percent full at all times. After all, they make their money by filling cells. The students here are watching their families, communities, and hopes torn apart by the realities of the geography in which they live.

In 1940, Booker “Bukka” White penned the song “Parchman Farm Blues,” about the ill-reputed prison that before World War II operated as a for-profit cotton plantation. “Oh listen you men / I don’t mean no harm / If you wanna do good / You better stay off old Parchman Farm.” They’re famous lyrics, but because they offer a soft and charming tone that’s easy listening for outsiders (“Good bye wife,” moans Bukka.) The lyrics elide the systems that make prison a destiny.

Listening to students and spending more time in West Tallahatchie communities has made me turn to music that feels honest, if not honestly aggressive. In “The Blacker The Berry,” hip hop artist Kendrick Lamar drives straight to the point: “I mean, it’s evident that I’m irrelevant to society / That’s what you’re telling me, penitentiary would only hire me / Curse me till I’m dead / Church me with your fake prophesizing that imma be just another slave in my head.” His flow leans into the rhymes with predictable cadence. That predictability is just what angers him. Any action he takes within the stereotypes associated with Black America — from “eat watermelon, chicken, and Kool-Aid on weekdays” to “watch BET [Black Entertainment TV] ’cause urban support is important” — makes him and his peers ideal candidates for living behind bars.

Just as predictably, Highway 49 runs from prison-to-prison, with a school in-between.