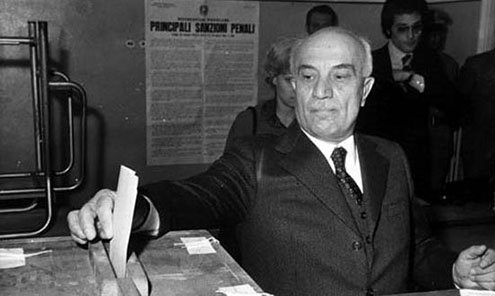 Christian Democrat Amintore Fanfani was an Italian prime minister five times between the 1954 and 1987, and never far from power.
W

hen I first moved to Italy 30 years ago, its politics bewildered me. I couldn’t keep the innumerable parties and factions straight. News reports hindered more than they helped. Coverage was all about who was up or down or what politicians were saying about each other rather than issues.

I eventually decided that Italian politics were like the internal combustion engine, something I would never understand and therefore best left to those who did.

However, three decades of Italian dinner parties, which always seemed to devolve into political discussions, evidently rubbed off on me.

So, while many Americans struggle to understand the dodging and swerving that characterizes Donald Trump-era current events, I figure it out pretty quickly thanks to my understanding of two guiding principles of Italian politics. Neither involves the tired comparison between Trump and Silvio Berlusconi.

The first principle is A cui bono? — Latin for “Who does it benefit?” The second, in Italian, is E meglio commandare che fottere, call it MCCF, which politely (and loosely) translated means, “Being in charge is better than sex.”

Using these two principles as magnifying glasses helps Italians see through the apparent chaos of governments in constant flux (like Trump’s mind) and the surprising resilience of political actors who never seem to vanish from the scene, no matter which party was up or down.

In Italy, cui bono usually referred to hidden financial or political gain — often inspired and fueled by elaborate conspiracy theories. The classic Italian example of this was a celebrated phrase attributed to Giovanni Agnelli, for decades the powerful and glamorous chief of automaker FIAT: “What is good for FIAT is good for Italy.”

But cui bono also applied to less tangible aspects of life, such as looking good (Italy’s bella figura) or psychological needs, such as being liked, seeming strong or avoiding shame. Understanding who really profited from any given choice or strategy usually shed light on otherwise incomprehensible political appointments, compromises and alliances.

Likewise, Italy’s parliamentary system was built on alliances and compromises between parties that until recently existed by the dozens. Parties needed to understand and create priorities among their interests to do the horse-trading and alliance building — and compromising — necessary to attain their goals. In this context, compromises were about spreading benefits.

As for MCCF, many politicians lived for the heady allure of acquiring power and keeping it — which also meant preventing anyone from impugning or threatening it. MCCF was behind most interparty and interpersonal games. The appearance of power and power itself could be virtually indistinguishable. News coverage followed and fed the trend. To be reported as near power was as good as power itself. Power, and the craving to have and to hold it, often intersected, especially at an individual level.

Politician Massimo d’Alema began his career in the Italian Communist Party in the 1970s. When the Communists disbanded in 1991, d’Alema refused to disappear into oblivion; he embraced personal ambition and kept his eye on the prize. He steered through the political financing scandals of the 1990s and 14 years of Berlusconi. He managed to become prime minister (1999-2000) and a member of the European Parliament. In 2016, he still had enough power to influence an important Italian referendum and bring down Matteo Renzi, the young, center-left prime minister who seemed set for the long haul.

So how do cui bono and MCCF work in the U.S. today?

Cui bono seems particularly noticeable in the Republican Party and the conservative movement, which has splintered into smaller factions that depend on alliances and tradeoffs much the way Italy’s smaller parties once did. Remembering cui bono can explain paradoxes such as the Evangelical right’s support of a president whose lifestyle and past contradict that movement’s “family values.”

Cui bono is probably behind Trump’s flip-flopping on issues such as the pro-immigrant Dreamers Program. The benefit of being liked for helping ” good kids” runs up against the benefit of receiving accolades from an anti-immigration base and hardline counselors such as Stephen Miller. Then there’s the matter of whether you want to be seen as a dealmaker or a negotiator, which is all about compromise, or an authoritarian strongman, all about imposing your will.

MCCF is probably an important reason many figures in the Trump administration stay on at the risk of lasting harm to their reputations. The “power is better than sex” equation may help the likes of Rex Tillerson and John Kelly resist repeated frustration and deal with the humiliation their boss dishes out on a near-daily basis.

It’s said that Millennials are having less sex than previous younger generations. They may not be the only ones. I wonder how many Trump administration officials have been telling their spouses, “Not tonight dear, I’ve found something better.”