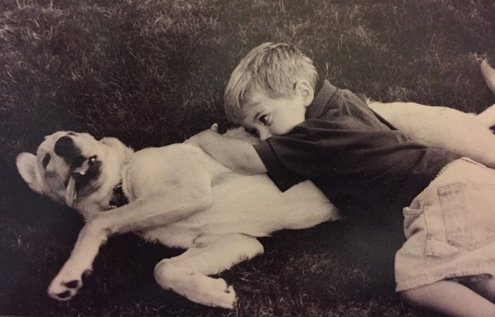 ast week I sat on my patio in the late summer sun. The house was empty, silent. I had poured myself a cool glass of wine and brought out my book, though neither interested me. The wine tasted sour, and the book, a wordy novel by Karl Ove Knausgaard, only depressed me further. So instead I focused on the many birds that filled both my feeders and on the huge maple tree that looms above my house.

As I watched the birds flutter from branch to branch, bushes to dirt, I felt a wave of melancholy and I began to cry. It wasn’t a blubbering sort of cry, the kind when you can’t catch your breath. It was a silent, private kind of cry — as if you know stranger is watching and you try to not embarrass yourself.

Earlier that morning my dog Lucy died. She was older than most dogs of her breed and it was simply time for her be free of the many aches and pains that had plagued her over the last year. I had bought Lucy at a fundraising auction more than 15 years ago. She was a gift for my eldest son Jack, who even at the young age of three, took on his duties of dog ownership with the seriousness of an adult. That very same Jack would be now leaving for college just four days after Lucy’s death.

I thought of Lemony Snicket: “It is always sad when someone leaves home, unless they are simply going around the corner and will return in a few minutes with ice-cream sandwiches.”

I knew that I should be celebrating Jack’s newest journey, his leaving the nest, as well as Lucy’s good long life, and accepting her different kind of departure. But all I could summon up was a deep longing for a young dog, and an even younger son.

Happy for the quietness of solitude, I let my sadness free and my tears continued to flow.

There have been times in the past when I’ve wished to be less emotional, less sensitive, less… soft. But it seems the older I get, the softer I become.

That wasn’t always so. I used to be a tough chick.

In my teens, 20s and early 30s I rarely cried. Even when I felt the sting of hurt feelings I’d swallow the lump in my throat and move on, even tougher than before. I preferred to do anything but release pain, so I kept myself very busy, and the pain inside. Emotional and sensitive by nature, I simply kept my feelings controlled and at bay.

That began changing when my brother died unexpectedly. The lump in my throat got so big it started festering like an untreated wound. In the funeral home, alone with his coffin, I shed a tear or two — but literally just a tear or two. I remember later wondering to myself, as my family and friends wept together, why I wasn’t soaking the tissues I kept tightly gripped in my palm. I forced more tears out, but a larger lump remained.

As the months turned to years I found myself crying more and more — sometimes blubbering away, sometimes quietly, as I was on the patio. After five years or so, and a particularly intense cry, I noticed that my old companion the lump had gone away. It didn’t burn. It no longer threatened to explode or hamper my speech. I hadn’t willed it away, or swallowed it. I had cried it away.

Most psychologists agree that the simple act of crying not only releases emotions but also relieves stress and anxiety. On a physical level, crying relaxes the parasympathetic nervous system, which allows us to feel better, calmer, more at peace. Not to mention the power of tears to actually cleanse the eyes of toxins and buildups as well as regulating the immune system.

Though it wasn’t my immune system I was thinking about on my patio, nor my parasympathetic nervous system. It was far simpler than that. I was sad at having lost my dog and seeing my son leave the nest for college, and I needed to release my sadness, my longing and even a bit of my happiness at having successfully done my job as a parent.

The one thing my past life as a tough chick taught me was that it wasn’t healthy to swallow lumps or to avoid expressing pain or pretend that all was well when it really wasn’t.

After my cry, I felt no festering lump. I felt relieved, and the birds, I noticed, had somehow multiplied around me.