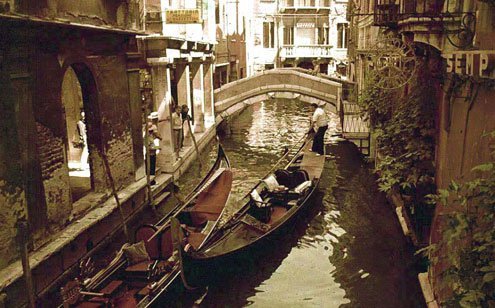 Gradually emptying out.
I

t was quite a while after arriving in Venice that we finally spotted that increasingly rare sight — a Venetian. At the café where we had drinks, the waitress was from the Philippines. She gave us a big smile as she handed us an equally large bill, and said in perfect English, seemingly oblivious to the fact that my husband is Italian, that she hoped to see us again very soon. Another warm welcome was waiting for us a few alley-ways down at the trattoria we chose for dinner. Our host, Abdul, from Jordan, couldn’t have been happier to see us, and he laughed and joked as he sat us down, gave us the menus, and took our orders. His colleague was friendly too. He was from Egypt, and turned out a pretty good pizza. Every so often, he’d come out and crack a joke with some of the Americans on the next table, or tweak my younger daughter’s cheek. It was all very jolly. In fact, it was just the way the archetypal Italian restaurant used to be, with the strange difference that here hardly any-one was speaking Italian.

The number of Venetians living in Venice is dwindling fast. Of the 320,000 inhabitants of the comune, only 70,000 live in the centro storico, and more are moving out each year. It’s not hard to see why, with property prices soaring and the high cost of maintaining even the most modest home against the encroaching waters. That explains why so many of the palazzi are being turned into hotels or taken over by foundations, and it also explains why it’s so hard to find an ordinary grocery store or a shoe repair shop. It makes far more sense to open up a souvenir shop selling prancing glass horses or stripey gondoliere T-shirts. At our bed and breakfast next morning, the owner was nowhere to be seen. She lived in Novara, I was told.

To be honest, the Venetians who have stayed behind don’t seem to be that thrilled by their lot. The frosty young waiter at Florians where we had our very indifferent cappuccinos looked heartily fed up and managed to serve us without once opening his mouth to speak, let alone smile. Talk about service with a snarl! The middle-aged lady on the vaporetto out to Murano later that morning was far more loquacious, though hardly serenissima. She delivered a broadside to the hapless American visitor whose baggage was blocking the narrow gangway, before stomping off, muttering furiously about how impossible the tourists were.

To some extent, I sympathize. It must be infuriating having armies of visitors traipsing through your city, blocking all the passageways and taking up all the seats on the vaporetti. But it’s also the bread and butter of most remaining Venetians, and it does seem churlish to treat the golden goose with quite such a large helping of disdain. A fair number of the few locals who have opted to stay appear to have decided to milk the tourists for all they are worth in the knowledge that most of them will never come back — figures show that the vast majority of visitors to Venice come just once and stay less than 24 hours.

The result is an unattractive form of smash-and-grab tourism, where the hosts make it abundantly clear that they are only interested in the contents of your wallet. And a pricey place it is too. I read recently that the average gondoliere makes €115,000 year, and public transport isn’t much better. For our family of five, a 24-hour pass cost nearly €60. The round of drinks in the café — and we’re hardly talking Harry’s Bar here — was a quick €25, and the decidedly second-rate cappuccinos at Florians set us back an unbelievable €4 apiece, standing at the bar. I hate to think what we would have paid had we rashly decided to sit down. Even good old Abdul went for the jugular when it was time for the bill. In the window, the prices of pasta dishes looked reasonable. But prices of drinks and most other dishes were only displayed inside, and by the time you realized you were going to pay €16 for a plate of pasta con pesto, or walloped €30 for a carafe of virtually undrinkable red wine, it was too late.

Our children had the right idea. They couldn’t have cared two hoots about queuing up to look at the Doge’s Palace or going to bars which sold fake Bellinis. The thing that made them whoop with joy was feeding the pigeons in St. Mark’s Square, and at one euro a bag of pigeon feed, that’s probably the closest Venice can come to a bargain.