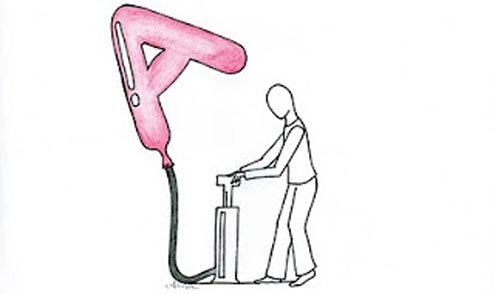 Most objective measurements of intelligence are marred by lack of context.
W

hen I was in first grade, we were given a test in which we had to cross out the object that didn’t belong in the picture. I suppose it was intended to test our reasoning. The one I remember most contained an apple, a loaf of bread, a flower and a tomato. I knew I was supposed to cross out the flower since you ate all the others. But the flower looked a lot like a zucchini flower, and as Italian-Americans we ate zucchini flowers. In fact, it was one of my favorite dishes as a kid.

So while I knew the test-givers wanted me to cross out the flower, I crossed out the loaf of bread. Maybe I did it to assert my identity or maybe just to be contrary (which I often was). But the bread was man-made and the flower and the tomato were not. Of course the answer was “wrong.” Yet I was right. At least I was also right. They were also right, too. Who knows what other answers could also be right.

Multiple-choice tests are usually considered “objective” tests. Yet in fact there’s nothing objective about them. Someone had to make up the question and a question can only be as smart as the person making it up. Moreover, the development of a question expresses its maker’s subjective views of the world, and life is far more complex than a one choice on a multiple-choice question.

In one widely used intelligence test for kids, there is, or was, a question that went something like this: “If your mother sends you to the store to buy milk and they don’t have any, what do you do?” The correct answer was supposed to be, “Go to another store.”

Well, maybe. But certainly not if you live in a bad part of town and there’s a nasty gang in the neighborhood where the other store is located. And these days how many kids are sent to the store for milk?

Yet the results of intelligence tests are considered as the objective measure of that “something” called “intelligence.” They are also championed as “objective.” After all, the test measures IQ, the acronym associated with intelligence, and comes up with a numerical score. This by itself makes them authoritative and objective.

Grade point averages (GPA) are considered the “objective” measures of a student’s scholastic ability. Scholarships are often rigidly withdrawn from students whose GPA dips below a certain number. But that’s not the full picture. Which student is more deserving of the scholarship, the one who takes the four easiest courses and gets A’s or the one who takes five demanding courses but gets B’s? Which one would you admit to graduate school?

One is playing a numbers game and demonstrating a shrewd if not calculating approach toward “education.” The other is actually interested in what they’re studying.

Notwithstanding, the GPA is repeatedly seen as real, concrete, and — again — objective. It, too, depends on an acronym and a number. How easily fooled we are by scientism!

If I were so inclined, I could make a very “scientific” study of the readers of this column, average their age, multiply it by their height, and divide it by the number of articles they read in this magazine every month. I could call it the AHA factor and emerge with a very precise number. I could even call it an objective measure. But, as they say in Rome dialect, misura de che? (“A measure of what?”)

Aside from the matter of just what’s “objective,” I wonder why we’re so concerned about objectivity. Nothing exists free of context. Context is what gives facts and events their basic sense. How context affects our view of self and the world is in turn subjective. It’s impossible to extricate ourselves from this context.

Context elicits its own set of questions. What precisely are we looking for in a student applying to college or grad school? Is it the ability to memorize data? Is it skill in cynically working the system? Or is it a passion for subject matter?

More and more, students go off to college never having been challenged by a complex essay exam in which they’re asked to compare and contrast ideas or phenomena as well as analyze their implications and origins. Many high school teachers teach to tests that hinge on a set of specific facts. College entry (and educational funding) increasingly depends on these “objective” measures, with objectivity equivalent to what can be counted and separated into discrete entities. But enthusiasm, intelligence and understanding are not entities, and they are not discrete.

Our kids are being crushed by the number crunchers, and their creativity, enthusiasm and curiosity crushed with them.