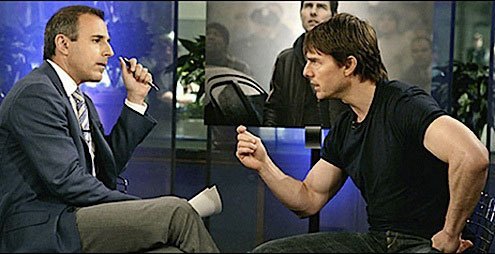 Lauer to Cruise: Uh, let me think about that...
I

’m bad with dead aliens, worse with lost souls, incorrigible over proselytizing. But I like Tom Cruise.

Since mid-June, Cruise has popped the question to Batman actress Katie Holmes on the Eiffel Tower, generating slam-dunk wows and catty envy (the Washington Post labeled Paris and tower “retro romance” — “a great big ‘ick,’ right up there with [a] marriage proposal on the ‘Jumbotron’ at a baseball game.”)

He’s also again pledged devotion to L. Ron Hubbard and Scientology, last week “pompously lecturing” American talk show host Matt Lauer (hyperbole courtesy of the New York Daily News) on the perils of psychiatry. And Scientology, the News went on to explain even-handedly, is “the religion that says humans are plagued by the souls of dead aliens who invaded the planet 75 million years ago.”

Talk about piling on.

I don’t know Tom Cruise. I don’t have an ax to grind on his behalf. As an actor, he has determined talent and a luminous smile. I remember him best in Oliver Stone’s “Born on the Fourth of July,” where rage became him, and in “Magnolia,” a quirky dose of bravura.

Scientology, meanwhile, is an unpleasant bit of unfinished business, and Cruise won’t drop that bone. There’s also the matter of possessing women called Nicole, called Penelope, called Katie (the latest is most beloved), and just how that stacks up in the primeval canon of testosterone. So-called “post-feminist, post-ironic” women — another delectable Washington Post description that may or may not refer to “post-readers” — apparently find him either immensely attractive or crassly detestable, or both. Others insist he’s gay.

None of these suburban details would mean much had I not seen Cruise interviewed at length by the often insufferable but ever-resourceful James Lipton on the Actor’s Studio program, taped in front of MFA candidates at the New School. The year was 2002, I think, and Lipton gave Cruise nearly two full hours.

Cruise was in turn shy, serious, private, bright, and always thoughtful. He lit up when speaking of his sisters and mother, who raised him when his father walked out. He got to them by way of recalling a lower middle class childhood in suburban Glen Ridge, New Jersey. Born Thomas Cruise Mapother IV, the son dropped his estranged father’s surname. The two were reunited only when the latter was terminally ill.

Nothing about Cruise — once a Franciscan seminary student — seemed at all objectionable. If he is vain (an allegation the Hollywood press camps on) the vanity did not mar him, nor is narcissism unusual among high-profile actors. Only once, toward the end of the Lipton exchange, did Cruise mention Hubbard — but in fairness he was asked about mentors and inspiration.

All of which leads to what happened with “Today” show host Matt Lauer — who, ladies and gentleman, is no James Lipton. Some guidelines. Cruise is promoting two major films, including Steven Spielberg’s remake of “War of the Worlds.” His Paris proposal to a woman 16 years his junior got him a post-ironic bashing, including claims that the love affair was publicity stunt, that he had brainwashed starlet Holmes, that the two had engineered the Paris pledge to promote their movies.

So far, so good — at least in Hollywood terms. Buzz resuscitates over-40 careers and hypes starlets.

Emboldened, NBC’s Lauer charged ahead. How, Lauer asked, could Cruise rap Shields for taking anti-depressants, Generation Anxiety’s coolest foot-soldiers. They helped her, or so she said.

But Lauer had not studied Cruise’s verve. Or had and misjudged it.

Sound-bite city got a Crimean mauling.

Misinformation, psychiatry as pseudoscience, anti-depressants — all of them, Cruise announced, were dangers. Shields and Lauer knew nothing of the perils of psychiatry, including the effect of drugs and shock treatment. This cranked up the News. “The high school dropout launched into a diatribe about mental illness,” the paper said. Cruise called Lauer “glib,” which under the circumstances is hard to refute.

Cruise would have done better with Dick Cavett or Ted Koppel. Cavett (with Jim Brown and Lester Maddox in 1970) and Koppel (questioning beleagured Dodgers executive Al Campanis in 1987) mined stylish intelligence from even subpar banter. Lauer wasn’t up to it.

It’s easy to trifle with highly-paid actors who milk offbeat causes and manufacture recipes for redemption. It’s simple to mock celebrities as self-indulgent and impressionable. We made them, after all, and skepticism is plain good fun.

But when professional casualness becomes the rule — and is faced, in Cruise, by someone considerably less casual — sounding clueless is a risk. Answering fervor begs a lot of homework. If it eludes the U.S. government, Matt Lauer hardly stands much of a chance.

I remain unfriendly to dead aliens and incorrigible when it comes to proselytizing. But I’d gladly spar with Tom Cruise. He deserves that much. We’d probably get nowhere on anti-depressants. But I’m all for the Eiffel Tower, even if it’s a stunt. Great big icks look gorgeous at night.