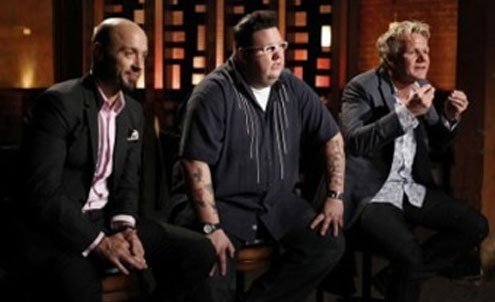 Shows like Fox's "MasterChef" take pleasure in contestant takedowns.
A

lot of food writing these days is opinionated. And that’s not such a bad thing. But there’s fine line between expressing opinion and signing off on what are basically dictatorial edicts.

More often than not, today’s food authorities — critics and personalities (some of them self-appointed) — tend toward absolutism. Maybe you’ve noticed how food journalism has changed from being helpful and pleasant leisure-time entertainment into a practice saturated with finger-wagging sermons in which attitude comes ahead of food.

Let me break it down. Writers are obviously entitled to promote their views on cooking and eating, whether it’s about what’s served at home, what school cafeterias should offer up, or simply what to buy. What’s not acceptable are hostile and judgmental viewpoints almost invariably framed in take it-or-leave it terms.

I wonder if the trend got started with American chef Anthony Bourdain’s “Kitchen Confidential,” a restaurant industry exposé that became an instant bestseller after its publishing in 2000. Bourdain’s confessional described commercial kitchens as intense and unpleasant, if not dangerous, some staffed with as high-as-a-kite misfits. Bourdain was the first insider to write about the dark side of being a line cook in booming 1980s New York City. It was self-destructive writing for an easily shocked bourgeoisie, with the heroin and the grime exuding a cool and sexy feel. Bourdain was quickly catapulted into media celebrity, and his gritty, often malicious approach heralded as trendy. The rest is Food Network history.

Bourdain’s volleys helped set the tone for the bombastic and foulmouthed reality shows that followed, including “MasterChef,” “Hell’s Kitchen,” and “Top Chef,” all of which thrive on confrontation. Contestants are berated and abused in the spirit of “American Idol.”

The shows reverberated into writing. Once delightful topics got a hardcore edginess. Differences of opinion turned aggressive. Writers and food celebrities began openly discrediting those who disagreed with them. Debates over the historical background of a specific ingredient could turn into hand-to-hand combat.

This now commonplace behavior reminds me of cliché of the snob sommelier who gleefully underlines your ignorance by dropping varietals and appellations as he explains a hieroglyphic wine list. What you wanted was a nice bottle of wine to go with your ossobuco; what you’re getting instead is a condescending lecture. While most restaurants have toned this down, publications and TV still revel in it. Lecturing is trendy.

Mainstream online food writing is riddled with inflammatory prose that elicits incendiary reader responses. Supporters of a specific food writer see his (or her) words as dogma. Those who disagree are idiots or fools who get a lynch mob approach. Finding a constructive middle ground matters less than fueling ferocious disagreements, with rigidity as the yardstick. Flexibility? Zero.

Good cooks improvise. That’s the truth. They exchange this for that; they tweak (with the exception of bakers, who are more scientific). Resilience and experimentation can give an old dish new character. A teaspoon of umami can yield an original twist. If the kitchen encourages innovation and tolerance, why shouldn’t food writing? Why all the journalistic extremism? I don’t want restaurant owners to shudder when I walk into their dining room. Yet some food writers revel in that shuddering. If I don’t find a place particularly interesting I just won’t write about it. Period.

Tearing commercial establishments apart to suit the needs of entertainment (and business) is alarming. I hope and pray the rumor that some high-powered websites are actually paying copywriters to badmouth restaurants is a hoax.

I know we live in polemical world. I’m not Pollyanna. But some egos need deflating to help food writing regain the fundamental value of sharing. When food blogs were born — and I watched that birth — they were marketplaces for ideas, not bully pulpits.

Sadly, as the overall tone grew harsher, some food writers morphed into proselytizing narcissists, encouraged by the tone of reality shows, social media, and the growing partiality to see snarling as a form of teaching. It’s not.

Yes, it’s important to educate younger generations on how to eat better. Their health is at stake. I’m a mother: it’s vital to me that my child live a fruitful life, eat properly, respect nature and its cycles, and encourage others to do the same. Food knowledge is indispensable in an age of genetic modification and toxic preservatives.

That said, being reasonable is a virtue. I refuse to say I’ll never feed my son frozen Atlantic sole or a panino stuffed with pre-sliced prosciutto. I will avoid supermarkets whenever possible (I practice what preach) but I won’t be made to feel guilty if I’m seen in public eating artichokes out of season.

The pompousness must end. Our job as food writers is to stimulate ideas, share recipes, and alert readers to delicious food and the places that serve it. Instead, I too often see fellow bloggers bogged down in mile-long reply streams, with hundreds of readers exchanging adolescent hostilities (e.g. “No! No! NO! There are to be no onions in amatriciana!!!” and “Shock! Horror! You don’t put cucumbers in your panzanella?! Are you out of your mind!?”).

These aren’t red state/blue state issues. It’s not birth control or global warming. Food doesn’t require bulging jugulars — in the U.S. or Italy. Expats who weigh in with constructive comments on Italian food websites don’t need the comeback, “Go eat your hamburgers and don’t come telling us about how cacio e pepe should be cooked!”

Today’s food writing has lost most of its levity and all of its humor. And that’s a crying shame, because in the end it ain’t Shakespeare.