Cruel and too usual 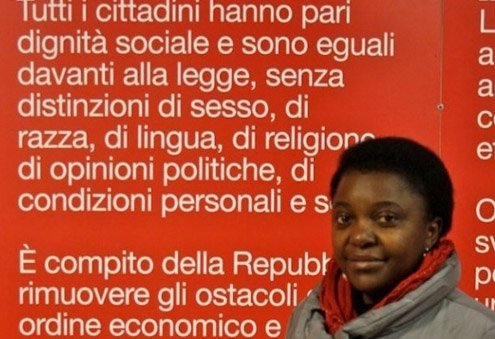 Integration Minister Cécile Kyenge was born in the Democratic Republic of the Congo, was naturalized as an Italian two decades ago.
I

am working as a volunteer in a rural village in Northern Tanzania for the summer. A few days ago, a Kenyan friend came up to me during breakfast and commented on my dour expression.

“Once again, I’m ashamed of my country,” I replied.

He didn’t understand. I them told him about recent incidents in which Integration Minister Cécile Kyenge, the first black woman to serve in an Italian cabinet post, had been compared to an orangutan by a leading politician and later pelted with a banana during a rally of her own center-left party.

To my astonishment, my friend did not share my anger and indignation. “People like you, who work here, know that skin color doesn’t matter,” he said. “Not all of Italy is racist: you are also Italian.”

His remark gave me pause: It is true, not all of Italy is racist. Despite the international headlines that followed the various Kyenge incidents, as well as media reports suggesting that racism is embedded in both Italian politics and Italian culture, I suddenly felt compelled to defend my country.

I wanted to tell the world that what they were seeing wasn’t the whole picture. Italy is filled with normal people who believe in the fundamental equality of all races.

There are people like my mother, a social worker who helps immigrant families build a better future for their children. Or those like my sister, who volunteered for years in a small educational center to teach Italian to immigrant’s children in Verona, my city. My father, a judge, refused to go ahead with a trial including immigrants if they were not provided with a translator who spoke their language — a practice required by Italian law, but often overlooked in court.

Italy has many families like mine, which taught me from birth that human beings are the same regardless of skin color.

Article 3 of the Italian Constitution specifically calls for human equality independent of gender, race, language, religion, political ideology, and personal and social conditions. “The law is equal for all” is written large on the walls of in every Italian courtroom (just above the crucifix, which still hangs in most official rooms and classrooms, though Italy is a secular state).

I want the world to know this Italy. But this Italy doesn’t make the news. And the reason is obvious.

Abhorring racism should be normal. Except that in Italy it’s not.

While my Kenyan friend was busy reassuring me, I thought of our parliament. The Senate vice president is Roberto Calderoli, a key figure in the anti-immigrant Lega Nord (Northern League). Calderoli, who made the orangutan remark, is a member of a center-right bloc that holds 30.7 percent of the country’s Senate seats and 29.1 of those in the Chamber of Deputies.

I then think of Verona, whose mayor, Flavio Tosi, was sentenced to two months in jail four years ago for inciting racial hatred. Nonetheless, he recently won reelection with nearly 60 percent of the vote. Though 22 percent of outsiders entering Italy come from Africa, a growing pattern, the Congo-born Kyenge was still the first black minister (a naturalized Italian citizen, she’s lived in Italy since 1983).

I think of all the insults she was “welcomed” with immediately after her appointment in the spring. Calderoli did apologize but refused to resign. Dolores Valandro, a Northern League politician from Padua, added further humiliation on Facebook: “Why doesn’t anybody rape her? She would finally understand how victims of this crime [supposedly performed by immigrants] feel.” It goes on. Mario Borghezio, a Northern League member of European Parliament, accused Prime Minister Enrico Letta of overseeing a “bonga bonga” government and accused Kyenge of seeking to impose “her tribal traditions” on Italy. There have been countless painted slogans, mostly in smaller northern cities: “Kyenge, go back to Congo” and “Immigration kills” — further reasons for international media to mock Italy’s sense of decency.

Inside of me, a voice says, “Good Italy, normal Italy, I know you are there: why don’t you speak up? Why aren’t you the majority? Why don’t you vote for the better?” Too often I get no reply.