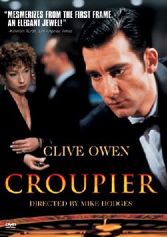 Clive Owen captures London on the skids in this little jolt of a movie. He’s Jack Manfred, a struggling writer who uses his gambler father’s connections to get a part-time job as a croupier. He doesn’t count on getting hooked on the duplicity. As his relationship with his girlfriend collapses, he meets and falls for Jani (Alex Kinston), a South African huckster with an involving scheme. Keyed up and vulnerable, Manfred loses his grip.

Original “Get Carter” director Mike Hodges completely masters this temperamental work. Manfred is stuck between using and being used, with Hodges capturing the ambiguity. Owen demonstrates the bluster and blues that Hodges likes from his London losers. Tight, bright, and smart.