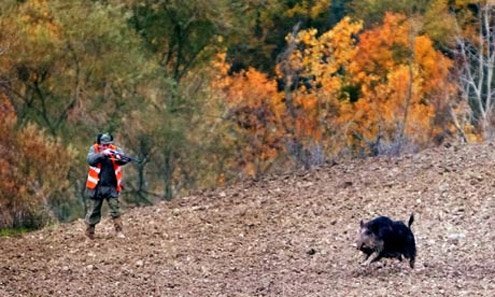 Regional governments are sometimes the most protective toward hunters.
A

s the trees start changing color and the nights grow longer, the wildlife in our valley grows increasingly agitated. Winter is coming. But it’s not the drop in temperatures they fear, though autumn and winter can be harsh in the Marches.

Local animals — deer, rabbits, and wild boar in particularly — must now watch their backs, keeping a weather eye on the horizon for khaki-clad men in orange stripes. This is the time of year when the cacciatori, or hunters, begin lurking in the bushes on Wednesday and Sunday, hoping to bag a nice fat boar (the season runs from early September through the end of February).

The hunting debate divides our little community like no other. In fact, it’s a political hot potato in many areas of rural Italy. I have my own feelings on the subject, and they’re mixed.

Italian hunters get remarkably free reign. By law, they can roam private land and discharge their weapons within 150 meters of a house. Much of this dates back to the Fascist period, when the government liberalized hunting laws to encourage citizens to learn more about how to handle guns. Those laws remain.

If their freedom hunters have annoys locals, it can enrage foreigners. Admittedly, hunting statistics aren’t always about game. In the first four months of the 2012 hunting season (Sept. 1 through Dec. 25), 25 people died and 88 were injured in nationwide shooting accidents. Accidental shooting headlines are common enough in the countryside, with hunters often shooting each other. It doesn’t help that most of the country’s hunters are between ages 65 and 80.

But for most British expats, the hunting hot potato sizzles for other reasons. First, guns are just now part of British culture. Police don’t routinely carry weapons, civilians never carry them, and hunting is an elitist activity. British hunters style themselves as posh. They dress up in silly red coats and chase foxes across fields with a pack of dogs. The foxes are then torn to pieces making them inedible. This is done in name of nature conservation.

We members of the Proletariat would probably better respect red-cloaked hunters if they just admitted they found the whole thing to be lots of fun and did it to hobnob with royalty — never mind how obnoxious that might seem to the rest of us (particularly when a pack of dogs runs charges through your patio doors and tries rooting out your pet cat. Sue me, I don’t care I saw it with my own eyes.) That might explain why we Brits feel a little rattled when men carrying guns suddenly appear in our garden.

But it’s important to point out that England and Italy aren’t alike in that way. An Englishman’s home is his castle. Moving to Italy means getting used to living in a republic and dealing with all aspects of egalitarianism, including the parts of it you don’t like.

Personally, I embrace the countryside values around me. I love the way the postman and the solicitor look each other in the eye as equals. I love the way everyone sends their children to the same school (British society is still divided by who went to private school and who didn’t). I love the respect people have for all professions, especially for cooks and waitresses. And while I understand that Italians can be both snobby and sometimes extremely rude, their approach still doesn’t carry the crushing weight of the British class system.

Hunting laws are often the first to change when a republic takes root, but for the most basic of reasons. Common people starved when royals and aristocrats were the only ones allowed to hunt for food, which was the case for centuries on the Italian peninsula.

Yes, the Italian situation carries its own set of risks (all hunting does), but at least here no one wears silly red coats. And a great many hunters aren’t just out to amuse themselves let along trying to win points with the local aristocracy.

The hunting lobby is quick to point out that it has only two days a week to work with, not seven, and that some of the animals its members shoot, boar in particular, feed on large quantities of agricultural produce. Moreover, the number of hunters in Italy has dropped to about 750,000, down from the more than three million in 1970.

In that sense, British inhabitants of rural Italy need to work on being a bit more tolerant toward local hunters. They need to take a moment to consider Robin Hood, our national champion of starving peasants.

Do I want hunters prowling our land? No.

Do I begrudge them the right they have by law, until the law is modified? No.

Plus, if you play your cards right you might end up with a nice juicy piece of wild boar.