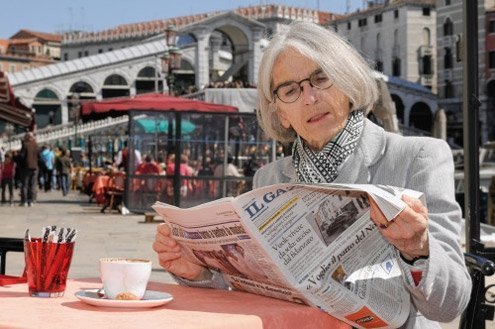 New Jersey-born Donna Leon has made Venice and crime into a lifelong beat.
&

#8220;The Golden Egg” (Heinemann: London, 2013), whose title plays off the title of a memorable Aesop fable, marks Donna Léon’s 22nd Commissario Brunetti mystery. Once again, the engaging, evergreen Brunetti makes tracks through the thousand-island Venetian lagoon, this time after a golden egg, the goose that laid it, and the greedy monster that killed the goose.

Typically, Léon immediately immerses the reader in off-the-beaten track Venice, after which she begins introducing plots and sub-plots.

“Egg” opens with the Brunetti family at home. Commissario — wife and teenage children — are closing out the dinner hour with a language game, a regular piece of family entertainment. The game is played out in Venetian dialect, Italian, and English.

Léon’s premise? That speech is a primary contact tool and part of family bonding (“If the Brunettis had a religion, it was language.”) Léon will deploy this theme throughout the novel to dissect the many-layered effects of language, and of speaking out.

The next morning, Brunetti’s wife worriedly calls her husband at headquarters: a deaf-mute who worked at their local dry cleaner is dead: a suicide, or so it’s supposed. She feels guilty. Despite many years as customer, she never knew his name. He seemed dimwitted, but since he didn’t communicate, even by signs, it was impossible to know.

Brunetti probes the death, and to his growing dismay learns the extent of the ignorance the deaf-mute’s life. His name was Davide Canavella and his body dispatched to the morgue by phone call from his mother Ana, who signed a hospital van receipt providing his name. With this, washed her hands of the matter. Asked to let police into her apartment for standard follow-up questions, she refuses.

But a crucial legal question still hangs in the balance: was it really a suicide? Chief Medical Examiner Ettore Rizzard says the dead man is in his 40s, judging by his teeth, and that he died after a “meal” of hot chocolate and cookies. Followed by a dose of pretty yellow sleeping pills. Had Davide mistaken them for candy?

Brunetti and sagacious sidekick Tenente Vianello see that as a possible theory, but aren’t convinced that someone as mentally challenged as Davide would have found and taken the pills.

While considering this problem they confront another puzzler: where’s the bureaucratic data necessary to issue a death certificate? Signorina Elettra, the HQ computer genius, taps into local files without result. No Italian ID for Davide, no trace of residence, health or school records. In his silent passage through life he might never have existed.

Warrant in hand, Brunetti finally persuades Ana to open her door. She response to him confused, with irritation but not grief. She insists Davide’s birth certificate was lost in a long-ago transit from France to Venice. His Italian papers were stolen just a few months earlier, when her apartment was burgled. They were the only items taken, she says.

Thwarted and suspicious, Brunetti trods through narrow calles and tiny bridges on his way back to headquarters. There he learns that neither French nor Italian systems have any record of Davide’s mother’s residence in France, or of any husband. Worse, Ana’s neighbors — like most Italians —”don’t trust the police,” and refuse to give Vianello further details. They will eventually confess that Ana never left Venice, but unanimously insist they weren’t even aware of Davide’s presence until he was twelve, when, they say, the child “appeared out of nowhere.”

The Léon/Brunetti hunt then moves onto a police boat bound for young Ana’s place of work: a rich, canal palazzo. Soon we’re introduced to an elderly heiress, another suspicious and stubbornly silent figure, who offers Brunetti homemade cookies but little in the way of information. Though they speak in dialogue, trust is absent. People may trust others but not the state. But she does one tiny clue slip.

Soon, Brunetti will get to the sordid bottom of the sordid tale of avarice and cruelty that determined Davide’s life. But he can hardly believe that Davide was left to his own devices, his tale untold — “It daunted Brunetti, the pathos of it.”

And here we stop. No use spoiling this author’s intricate crime conclusion, which reveals the obsessive distrust Italians have for all government institutions. This is a classic Aesop-like tale of greed. It is about people who crave more only to end with far less than what they had before the craving began.

With its arrayed character portraits, elegant prose, Venetian views, and crime-puzzler perfection, this a typical Léon/Brunetti delight. She’s the unofficial laureate of her adopted city’s inner and outer geography.