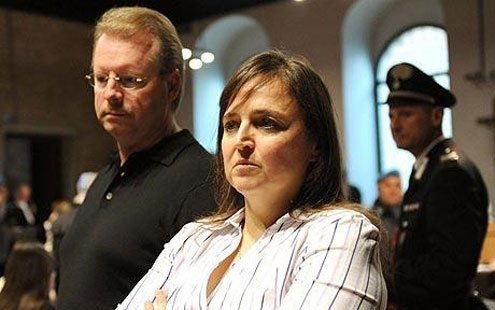 Curt Knox and Edda Mellas, Amanda Knox's parents, are under investigation for defamation.
I

t’s one thing to go to foreign country unfamiliar with its local laws and customs. It is another to ignore that lack of knowledge. Amanda Knox and her parents, Edda Mellas and Curt Knox, spoke their minds about alleged Italian police brutality based on American premises and perceptions, and as a result waded into a mire of defamation laws and criminal charges.

Picking up swords is no longer an option. Once, however, dueling to protect one’s reputation and honor was the obligatory if not the preferred way to settle such disputes, whether by sword, rapier or pistol. The history of resolving arguments one-on-one is intriguing and bloody. It stretches from Europe of the Middle Ages to America in the centuries after its discovery. Losing a challenge meant you were guilty, cut-and-dried, with religion often suggesting God had handed down the outcome. Dueling was also way to show courage. Losing face wasn’t the only risk. Many participants died.

Although both continents outlawed dueling toward the end of the 19th century, the human need to protect reputation and honor has continued under the more genteel guise of anti-defamation laws. In Italy, these laws are applicable nationwide, while in the United States individual states possess their own versions. Most define defamation as a statement that harms a person’s reputation. Spoken defamation is “slander,” written down it’s “libel.”

Defamation in Italy is more often than not prosecuted as a criminal offense with a conviction carrying jail time as well as nominal monetary damages.

A slander conviction can mean up to one year in jail, with six months for libel. The minimum fines are €1,032 and €516, respectively. A civil suit for damages can be brought in addition to a criminal case, or the latter can stand alone.

Amanda Knox, who is appealing her 2009 murder conviction, faces a separate trial on charges of having slandered Perugia police during court testimony at her murder trial. Her statements regarded police treatment during her interrogation on Nov. 5, 2007, four days after her British roommate Meredith Kercher was found dead at the rural apartment the two women shared. Knox insisted police failed to provide her with an interpreter, rebuffed her request for an attorney, denied her food and water, and called her a “stupid liar.” Her parents were indicted for libel by an Italian judge for repeating these same allegations in a June 2008 interview with the London Sunday Times. Knox has since said she was merely trying to defend herself and no wish to offend police.

In the U.S., defamation suits are predominantly civil actions, though several states also have criminal defamation statutes. Since the monetary damage sums awarded in an American civil suit are far higher than those in Italy, most Americans see civil action as a preferred route toward redress.

In Italy it’s not about the money. Given the low damages, what matters is criminal conviction.

Italy’s defamation laws are pedigreed with history and codified by a postwar constitution that goes beyond the mere protection of reputation. Under the Italian criminal code, defamation is classified as a “crime against honor.” While the right to free speech is guaranteed by the constitution’s 21st article, that right is weighted against the intrinsic worth of the person, which is given greater legal heft. This differs somewhat from the United States, where the legal balance is between free expression and the protection of reputation. The worth of personal honor, precious in Italy, plays a far smaller role.

There are also the issues of truth and intent. Truth is always a defense in the United States. In Italy the defense is governed by the situation. While attorneys for Knox and her parents are likely to use that defense in their defamation trials, the actual facts may never be known. There is no known recording of Knox’s 2007 interrogation (Knox’s account of the interrogation was contained in a June article published in Rolling Stone magazine that criticized the many trial adjournments and rued Italy’s “severe passion for holidays,” adding yet another layer of cultural bias).

Since these are criminal trials, the prosecution has the burden of proving the defendants intended to use offensive language with the knowledge that it would harm the officers’ reputations. Whether the prosecution can carry this burden remains to be seen.

But being right may not matter. Italy’s judicial system is culturally specific. Coming to Italy without respecting that reality is a perilous undertaking. You need to know the rules of the game before playing it, and in the case of Knox and her parents the Italian game has turned out to be very rough.