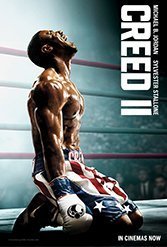 The latest in the “Rocky” franchise, “Creed II” is disappointing. One cause is the baggage of the prior, successful 2015 film featuring Adonis Johnson, the son of Rocky’s black nemesis Apollo Creed, who died in a match with Rocky in “Rocky IV” (1985). Another is the film’s over-the-top PC values.

Michael B. Jordan, an actor who can be fearsome (as Killmonger in “Black Panther”), portrays Adonis as neurotic and sensitive, hardly the right demeanor for the man who needs to keep his World Champion title while battling a towering, long-armed Ukrainian brute (played by a boxer in real life, Florian Monteanu), son of a boxer Rocky fought in “Rocky IV.”

PC subplots? Start with Adonis’ deaf fiancée Bianca (Tessa Thompson), who sings professionally, speaks with perfect articulation, and signs. The arrival of their daughter, profoundly deaf at birth, provides plenty of maudlin hand-wringing but otherwise contributes little to the story—except again to emphasize the empathetic, feminine side of our hero. Not what you need to step into the ring with a hard-hitting beast.

Silvester Stallone (Rocky Balboa) is a caricature-like Yoda, a know-it-all talker who dispenses advice — often contradictory—whenever he’s on screen, which is a lot (and seems to have only one set of clothes, perhaps the same ones he wore in “Rocky”). The black trainer who precedes him is, predictably, neither incompetent nor overly talented. All black males are good men with no flaws—gritless, uninteresting ciphers.

Everyone except the Ukrainians and Stallone are upper-middle class, or in the case of Adonis’ mother, an insufferably unctuous Phylicia Rashad, is obviously upper class, living in a sterile mansion.

The sense of place is strong in “Rocky” and the first “Creed,” both filmed in urban Philadelphia. In “Creed II,” the action skips from Philadelphia to New York City, to a barely recognizable Los Angeles, to a desert somewhere, to Ukraine, to Russia. Rocky Balboa came from somewhere; he was embraced by a meaningful and supportive community. Adonis Creed comes from nowhere.

The final boxing scene—which takes place in Russia, replicating “Rocky IV,” is well-filmed and exciting. That’s about it for the action in this action film. Even the pre-teens who saw it gave it 2 stars. “Too talky,” they said. Everyone agreed.