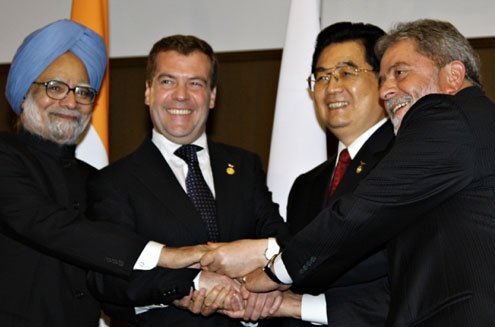 s the United Nations moves to ensure the righteous removal of Libyan tyrant Moammar Qaddafi — a “creature,” as Hillary Clinton calls him — noteworthy are the nations that denied the Security Council their yes.

In were the United States, France and the UK, together with a number of peripheral states including South Africa. Abstaining were all four members of the so-called BRIC coalition, Brazil, Russia, India, and China, a club of the world’s most aggressive and fastest-growing economies. Also abstaining was Germany, the planet’s fourth-largest GDP power after the U.S., China and Japan.

Moscow, Beijing, Brasilia, New Delhi, and, most interestingly, Berlin, put non-interference, which reflects realpolitik and commerce, ahead of humanitarian fix-it, a lasting amalgam of White Man’s Burden and appeasement guilt.

BRIC’s reluctance to meddle reflects self-interest and skepticism. China is in so deep with unsavory leaders in Africa and Central Asia that making waves is not only economically risky but potentially ironic. Vigilant Beijing is no Mother Teresa.

The developing world is busy acquiring wealth through any available means and wants no part of moral fracases that Europe, particularly France and Britain, enters into willingly so long as Washington provides approving cover. The receding France of Nicholas Sarkozy — a “creature” fan as recently as 2008 — is particularly eager to make a mark, any mark. It’s in his Gaullist DNA.

But it’s Germany’s role that becomes more intriguing by the year. Nazi penance finally done with, unified Germany is now by far the most important and opinionated member of the European Union. It is robust, conservative, fiscally attentive, and not easily swayed by emotionalism, no matter what the stakes.

Germany dislikes debt, irresponsibility, and imprecision, which makes the Libyan case something of a conundrum. Rational questions arise, most lacking definitive answers. If Libya’s leader is in fact a “must-go” homicidal tyrant, who or what replaces him? What about national sovereignty? Does military wrist-slapping to save civilians necessarily solve the larger Libyan dilemma or instead open the door to post-intervention obligations the West has no interest in fulfilling? What’s the plan after hoping to repair away the slaughter?

Humanitarian intent is marred by other inconsistencies. Qaddafi, like Saddam Hussein, was once a Western pet. To move from applauding his intelligence services for their help in the war on terror to disdaining him as a now-and-future madman fouls already cynical diplomacy.

Casualties were rarely mentioned as rebel forces took city after city, backing Qaddafi up against a wall. He was expected to die or flee, Hosni Mubarak style. The woe began when didn’t. Instead, he lashed back indiscriminately.

This, for Germany, is tantamount to civil war. Getting involved means picking sides in a fog, with no assurance angry rebels will be any more charming than Qaddafi. The last time Germany weighed into civil war was the mid-1930s, when Hitler backed Franco against Soviet-supplied Socialists, using Spanish cities to test his weapons. The only upside was the consequence of horror: Picasso’s “Guernica.”

Germany’s abstention is in line with Italian uneasiness. Libya is not only a former Italian colony, but also, until recently, a preferred partner against illegal immigration and a haven for oil-related business ventures. Until Washington intervened via the UN, opportunistic Rome dodged betting against Qaddafi lest he resurrect himself.

The yin-yang of policy-making is always fragrant with abstention, and sometimes features high-profile dissent. France’s falling out with United States over Iraq, a consequence of warnings that Washington would have been wise to heed, led to Freedom Fries.

No fries are in the mix this time. The BRIC nations and Washington are instead locked in long-term chess match that features the American side making and maintaining friends through promises of strategic cover — and weapons — and the Baby Boom BRICsters countering with investment capital and loans — and weapons. Germany, busy establishing its 21st century beachhead, hoards influence in between.

Keeping an eye on the Libya abstainers can help those trying to get a sneak preview of mid-century balances. Up-and-coming states don’t want their own efforts meddled with, and as a result tiptoe around the mined lawns of others. Export-driven countries climbing the ranks toward greater creature comforts and strategic clout don’t, won’t, and can’t regard the teaching of humanitarian object lessons as their job. For them, the greater good is a greased pig, constantly shifting direction and never absolute.