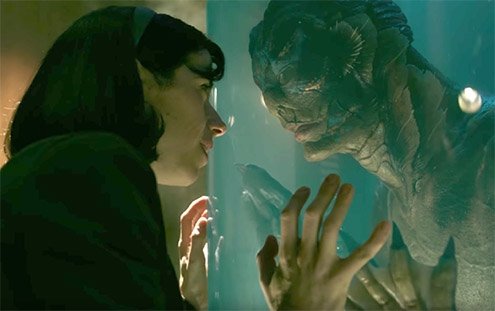 Elisa (Sally Hawkins) and her treasured creature companion.
I

n the age of Donald Trump, the consummate narcissist, it’s refreshing to find a film that’s all about empathy, all about treating others (or the “other”) with dignity and respect.

The protagonists in this drama are Elisa (Sally Hawkins, “Happy-Go-Lucky”), a somewhat mousey, 35-ish night-shift cleaner at a military complex of Brutalist architecture in which something akin to science is supposed to take place. She seeks companionship, love and, from the film’s first scene, sexual pleasure. Then there’s the creature (Doug Jones, a veteran of horror films), a scaly, fish-eyed, clawed, gilled, humanoid amphibian, brought up from the salt-water depths in clunky technology reminiscent of Jules Verne to be chained, then studied (at best).

Elisa is mute. She communicates with her co-worker Zelda (Octavia Spencer, “The Help”); her middle-aged, shy, gay friend and neighbor, Giles (Richard Jenkins); and, incredibly, the creature from the deep, through gestures, looks, and an intuitive and reciprocal understanding that comes from caring about others — that is, empathy. Dimitri/Bob (Michael Stuhlbarg), a Russian spy and the only real scientist at the facility, cannot be said to be empathetic, but even he labors to find a place within his Soviet ideology for genuine science.

Richard Strickland (Michael Shannon, “Nocturnal Animals”), who runs the complex, is the only main character who’s entirely outside the empathy frame. Despite having an attractive, devoted, pre-feminist wife, attentive children, and a comfortable suburban home, he cares only about his brand new finned Cadillac (representing excessive consumer desire and male omnipotence), and he puts the make on Elisa. Urinating in the men’s room within a few feet of female cleaners Elisa and Zelda, he is nonplussed; they’re not really people to him. Strickland reads Norman Vincent Peale’s “The Power of Positive Thinking,” but his selection of this banal 1950s’ self-help book simply demonstrates the superficiality of his effort to relate to anyone — or anything — else.

Strickland sees the creature as something to be tamed. It doesn’t go well, and produces just a touch of the horror at which writer and director Guillermo del Toro (“Pan’s Labyrinth”) excels. It’s fantasy, more than horror, that makes magic in this film. Strickland also dismisses the possibility that Amphibian Man could be a god, or God. Made in man’s image, he explains to Elisa and Zelda, God could look like one of them, but “more likely looks like me.”

The film’s Cold War setting, although arguably superfluous and distracting, contributes to its plot and tone. The Russian sub-plot allows for added intrigue and some violence, as well as another layer of complexity. More important, the early 1960s was an era of unusual cultural homogeneity — both real and imagined. It was a postwar environment characterized by limited immigration and the celebration of white-bread suburbs. Remarkably, it generated the James Stewart film, “Magic Town” (1947), which explored the concept of the “typical” American community — all white and middle class, of course. No room there for any “others” — blacks, women or gays, let alone mutes and monsters. The film double-dips into nostalgia and removes Elisa and her neighbor Giles from monotone suburbia by placing them in apartments filled with Victorian excess. The two watch 1930s and ’40s movies, rather than the nightly news; they see a lot of Betty Grable.

At the heart of “The Shape of Water” is the relationship between Elisa and the creature, between the beauty and the beast — except that Elisa is no beauty and the creature is something other, and more, than a beast. Alone with the beast in the wee hours of the night shift, Zelda offers hard-boiled eggs (fertility), soothing music from 33-1/3 rpm records, a disarming fearlessness, and her own need for companionship. Their bond deepens, producing some of Hollywood’s most touching scenes: the couple singing and dancing, a la Astaire and Rogers, to “You’ll Never Know,” and making under-water love in a flooded apartment.

Why does Elisa fall for this guy? As she explains, “he doesn’t even see that I’m incomplete.” They come to trust each other, and that’s essential. The creature proves capable of experiencing emotions, and that’s essential, too. And Elisa has sexual needs, which our creature is ready to fulfill with whatever’s between his legs. Add all that up and it still seems insufficient to bring this pair together, especially since Elisa isn’t about to wake from a kiss to a prince in her arms. But couples either work or they don’t, and this one does. Credit del Toro, who can imagine this combination of the bizarre and the fantastical, the grotesque and the romantic, and make it palpable, and credit Sally Hawkins, who somehow makes us feel what Elisa feels.