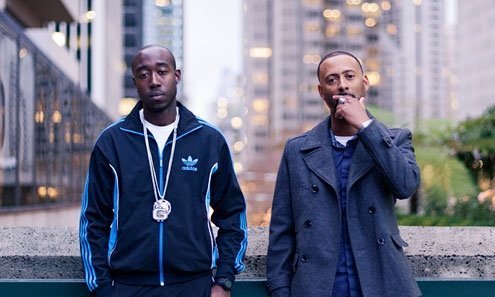 hough March always provides music fans with a bounty of strong releases, it was hip-hop that stood out last month. Even when it was bad — Rick Ross and HBO’s compilation Catch the Throne come to mind — it was still interesting.

But the cream always rises, of course. Richest of the lot comes courtesy Madlib and Freddie Gibbs on their first full-length collaboration, Piñata (Madlib Invazion). For heads that relish cratedigging funk beats and the throwback themes of high period gangster rap, there is no equal thus far this year.

It’s no surprise. The man born Otis Jackson Jr. has built a formidable discography using many aliases (Quasimoto and Yesterdays New Quintet for starters) but Madlib is his primary loop-making nom de plume. Though he has cut up everything from Blue Note jazz records to Bollywood scores, the beats culled from 1970s Blaxploitation films remain his primary locus.

Gibbs is a battle-hardened veteran emcee. Coming out of the American Midwestern industrial wasteland that is Gary, Indiana, Gibbs signed with major label Interscope in 2006 and escaped to Los Angeles. Then, for three years, nothing: Management changed hands and stalled his releases before finally letting him go. Through fiery mixtapes, passionate performances, and enthusiastic word of mouth, Gibbs has since earned grassroots support as an industry outsider. No wonder Piñata is an aficionado’s listen. Following three warm-up EPs, each man weaves together a crafty portrait. Gibbs uses his formidable rhyming skills to create a character deeper than a mere small-time hustler. Between interludes and over Madlib’s choicest beats, Freddie wanders from present struggles to past failures and back again. Appearances by old hands like Raekwon and Scarface and young guns like Earl Sweatshirt and Ab-Soul don’t steal Gibbs’s limelight. It’s a masterful performance.

For something more contemporary, look no further than another L.A.-based rapper in YG on his debut album My Krazy Life (Def Jam). First discovered via MySpace in 2009, the regional favorite is poised to break out nationally.

Part of his success — as with Gibbs — is down to his producer: My Krazy Life leans heavily on DJ Mustard’s ratchet sound, a barebones style that has swept urban radio over the last year. Aside from hit singles and a recent collection of his own, My Krazy Life is Mustard’s biggest calling card.

That alone would be enough to make a mark. But YG has more than a few things on his mind. His songs veer from predictable gangbanging to romance problems to the five-minute closer of repentance, “Sorry Momma.” Wonderfully paced with guest appearances from ScHoolboy Q, Rich Homie Quan and TeeFlii, My Krazy Life is as complete a portrait of the man behind it as one could have hoped.

The anti-colonialist message is clear in everything from the group’s name to their website to their first record, Pungwe. Afrocentric and explicitly defiant, Chimurenga’s African nationalist motives — Zimbabwe was a de facto British colony until 1980 — are spelled out mostly by Maraire, who draws on personal experience and the inspiration of his father, a Zimbabwean musician of the Shona people (the country’s largest ethnic group).

As with Shabazz Palaces, however, it’s the music that will make you sit up and take notice. Like Pungwe, riZe vadZimu riZe seamlessly blends traditional instrumentation, the ngoma (drums) and mbira (thumb piano), with thumping bass and beats. There is no mistaking this record’s spiritual origins and anti-imperialist intent. Though many acts may be trying out music in a similar vein, Chimurenga Renaissance is inimitable.