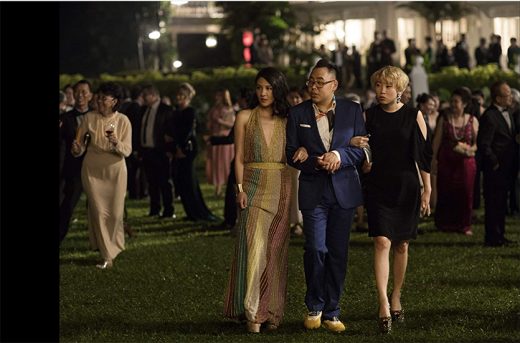 In the romantic comedy "Crazy Rich Asians," a native New Yorker travels to Singapore for an opulent wedding, producing all kinds of cultural fireworks.
O

ne of the delights of director John M. Chu’s comedy “Crazy Rich Asians” is hearing the reasons viewers worldwide are finding the film important or fun. Gleeful American-born Asians celebrate Hollywood attention. Real-life crazy rich Asians apparently thrill to identifying familiar places or people they think they know. Many viewers are excited about new, non-white male heartthrobs who are not Idris Elba. Is it time for an Asian Bond? Singapore itself must be happy with the two-hour product placement. Around the world hearts warm to see that —as Italians say —tutto il mondo è paese. The whole world is kind of like home. Scratch the surface of class, money, ethnicity and religion and we are all pretty similar underneath.

I was hooked from the minute the movie evoked one of my favorite sensations, the heady blast of foreign air that greets you when you leave the airport in a new place. The film also offered the same satisfactions of genre novels, such as romance and mysteries in exotic settings. All of it will of course work out in the end but in the meantime, you spend a few hours in someone else’s life on the other side of the world.

“Crazy Rich Asians,” which is based on a 2013 novel by Singaporean American author Kevun Kawn, gave me a bit of a champagne hangover. Flaws, including an occasionally sagging plot, came to mind only in the cold light of the day after. Nevertheless, thinking critically did not detract too much from the film’s high spirits. Deeper consideration also exposed a dimension of the film that escaped me at first. “Crazy Rich Asians” acts as a roadmap and guide for anyone facing the unfamiliar culture of another country, religion or family.

On arriving in Singapore, heroine Rachel Chu (actress Constance Wu) is swept into the excitement of dinner at a street market with her instant new friends. After that, it’s off to her roommate’s lavish house. In the world of the “Crazy Rich Asians,” Rachel has access to things out of reach at home: luxury, beautiful clothes, handsome people and good food. Likewise, when many expatriates first encounter “romantic” places such as Italy or France, they are seduced by access to things that may be exotic treats in America: Cheap and abundant wine and cappuccino! Great food everywhere and all the time! Handsome men, lovely women!

Longer acquaintance with the new culture usually reveals some cracks and nuances. Some of the beautiful new people Rachel meets are anything but friends and her roommate’s nouveau riche family loses its gloss when compared to old and bigger money. Rachel also becomes aware of family tensions and subtle class and cultural differences the same way expatriates soon see behind the Italian myth of a classless society of happy families bound by love of food and togetherness.

Rachel also moves through another typical phase of encountering a new culture when she realizes that some problems have nothing to do with being in a new place with new people. Like any normal character clash, they’re personal. However easy and obvious it is to let “cultural differences” explain misunderstandings and more, the explanation may create conflict where there is none. Sometimes the issues are just the result of different personal styles or histories. The best approach is handling them the way you would at home. Perhaps Rachel would have resolved the differences more effectively (although it wouldn’t make good cinema!) if she had tried to understand what her future mother-in-law Eleanor Young (Michelle Yeoh) had faced when integrating into her husband’s family.

The story of Madame Young and her relationship with her own mother-in-law is a good reminder that culture clashes are not just national. Anyone who has gotten a new job, moved up or down the social scale (or gotten married) knows that these can be as tricky as Rachel’s voyage between the worlds of American-Chinese and Singapore-Chinese.

As Rachel discovers, there are times when the biggest — and hardest —part of understanding another culture is understanding yourself. Leaving her fashion comfort zone when she wears borrowed finery taps Rachel into parts of her identity hidden behind her persona as an economics professor. When she learns about her own family’s past, Rachel gains new insight and finds the guts to take on a challenge.

The dramatic final scenes teach Rachel another valuable lesson. At times, the best way to integrate into another culture is not to integrate; not to surrender your native identity. Sometimes it’s better to bring it on. Your best tools for living in a new culture may be forgotten ones already in your own identity.

But don’t see “Crazy Rich Asians” just for its lessons on getting along in an unfamiliar culture —whether Italy or anywhere else. Go for the fun, for the colors, the laughable stereotypes and comfortable tropes, the great soundtrack and the cinema’s never-ending generosity, offering free tickets to the other worlds that share our planet.