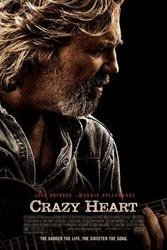 There’s a lot that’s exceptionally good about writer-director Scott Cooper’s ode to country music and personal redemption. Start with Jeff Bridges’ wonderful portrayal of middle-aged Otis “Bad” Blake, an alcoholic, four-times married country star and songwriter whose plentiful vices have reduced him to backwater gigs across the southwest. Bad is an American archetype, a going-nowhere hunk of overweight decency, heavy on talent and heavier still on booze (“I’ve played sick, drunk, divorced, and on the run.”) While on a gig in Santa Fe, he meets and falls for the far younger Jean (the always underrated Maggie Gyllenhaal), a single-mother journalist who epitomizes yet another archetype, the stand-by-your-man woman. Bad thinks he’s in love, but can’t, or won’t, kick his demons, grousing about money and letting pride get in the way of a reunion with younger star Tommy Sweet (Colin Farrell) who openly acknowledges him as a mentor.

For a blessed hour, Cooper keeps the camera on Bad, letting Bridges do what he does best, act, while giving him an opportunity to do what he’s rarely done on screen but always liked, sing. Bad’s a man who unapologetically and self-destructively lives his lyrics.

Cooper’s story comes undone when he picks too hard at the love story, using Bad’s relationship with Jean’s young son Buddy to sketch out Bad’s irresponsibility and open the door to his moral rehabilitation. Though alluring, parenting anecdotes can be the death knell of stories about lost souls. That gripe aired, Bridges and Gyllenhaal shoot straight in a decent and straight-arrow story that’s often eloquent and adds musical pleasure to its menu of riches. Bridges earned Best Actor Oscar honors in 2009.