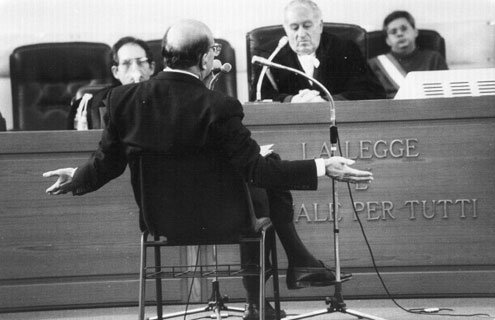 n late 1991 I got an idea for a free English-language magazine in Rome that I wanted to call “Open City,” playing off Rome’s World War II status and Roberto Rossellini’s landmark film.

But fundraising cripples the self-effacing. Fake smiles made me look rabbit-like. Or so I thought.

My loss, I was told, since Italy was flush with cash. Why not tell people that mine was a can’t-miss venture? Why not ply pseudo-businessmen awash in state construction contracts? Why not butter up politicians known to crave flattery?

By the late 1980s, rumors had already begun that Italy’s latest ruling class had transformed itself into a collective caricature of Gordon Gecko’s Wall Street.

Socialist Bettino Craxi had smothered the decade, his personal power deriving ironically from the weakness of his party. Around him were clever, loudmouthed frat boys — tiny Claudio Martelli and portly Gianni De Michelis — most of whom made hay from not belonging to the Christian Democrats, the long-time Catholic factory billed as having produced too many bad popes.

With the Christian Democrats and fading Communists still steeped in insults (against one another and internally), Craxi’s Socialists skimmed cards from the house’s deck. What couldn’t be bought was leased. Borrowed and stolen money kept pimps and clients happy.

Italy changes little when it comes to avarice, but the late 80s and early 90s possessed a peculiar grotesqueness. Craxi lived in a Rome hotel suite while some of his lieutenants openly cavorted in a coke-and-disco crowd that traded in favors.

My hunt for magazine funding stalled because my disco instincts were poor.

I confided my frustration to friend-of-a-friend, who ran what he called a property consultancy. His true business, I later learned, was as a middleman in the brokering of major construction and real estate deals, most outside Italy. He took bribes from all sides and hired secretaries for their sex appeal. He leased a Mercedes and Porsche for effect.

A dumpling-shaped boaster with a good heart, he chastised me for my naiveté, for lacking a sycophant’s cool, for failing to offer the obvious.

What sorts of things? I asked.

That backing me would assure better ties with the U.S. Embassy, with Washington, even the White House.

But I had no such ties, I argued.

The Italy of 2010 still struggles with memories of 20 years ago. A decade after his death in Tunisian exile, Craxi’s real legacy remains up for grabs. Misunderstood hero or monster? Misfit or pariah? Opportunist or ruthless “immoralist,” like so many before and so many after, including protégé and Milan businessman Silvio Berlusconi.

His one-time adversary, corruption prosecutor Antonio Di Pietro, who now heads the Italian “Values Party,” often exudes Craxi’s same sense of entitlement, as if all political self-esteem depended on blind ambition. “Every soldier has a marshal’s baton in his knapsack,” Craxi once said to explain his improbable ascent. Craxi and later Berlusconi would find Napoleonic bromides irresistible.

One day late in 1991 my middleman entrepreneur friend invited me to his office. “I have a surprise for you, two people who can help you.”

I always went to such meetings with extreme trepidation, a small lamb sniffing at the slaughterhouse. I waited for more hour in a gilded waiting room with Doric marble columns as mini-skirted secretaries fussed with coffee and mineral water.

Finally called into the office, I entered another dimension. The men inside, including my friend, who was seated behind a mahogany desk, were fogged in by cigar smoke. The shades were drawn down, blocking light.

My friend’s friend was Marcello dell’Ultri, and the man beside him his twin-brother Alberto, both leading players in Publitalia, the potent advertising wing of the Berlusconi TV empire.

My friend explained my magazine project and the men, thick, well-dressed Sicilians, puffed distractedly. “Think of it,” my friend told them. “An English-language periodical. It will sell hundreds of thousands! And the embassy will surely get involved!”

No, I interrupted, it will not. Nor would the magazine sell in such quantities. On a smaller scale, though, it might be a modest but wise investment. My eyes hurt.

The meeting, in which neither of the brothers said much, went nowhere. Finally, my friend escorted me out.

“You just shot yourself in the head,” he told me at the threshold. “Tell people what they want to hear. That’s business. That’s how you ‘do’ politics.”

In subsequent years, Marcello dell’Utri, loyal to Berlusconi, was named as a defendant in several corruption trials. Convicted on occasion, he nonetheless emerged mostly unscathed. He’s still considered a patron of the arts and holds an Italian Senate seat.

I continued hunting for clean money, which proved as elusive as ridding my clothes of their newly-acquired cigar stink. Some odors don’t wash out.