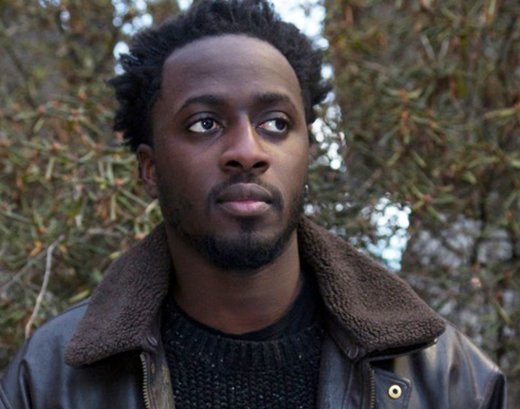 Nana Kwame Adjei-Brenyah, born near New York City, has been widely acclaimed as a top talent under age 35.
I

The story follows a daylong sales event set in a mega-department store’s mall. Its narrator is the store’s top salesman, who when the story opens beholds “ravenous humans” as they howl and storm the doors. The salesman is removed from this medieval onslaught, seated in a plastic cabin suspended above the fray. From this position, he uses a long, hooked pole to snatch goods from a rack beyond the crowd’s voracious reach. He then tosses these hugely discounted goods down into the raging mob, where their bloody contest for the prized items resembles a third world war. But from his bird’s-eye position, the narrator is removed from the melee below.

The salesman narrator of “Friday Black,” the title story, is situated in a plastic cage. When the story opens he beholds “ravenous humans” as they howl and storm the doors.

Little of this is particularly far from American reality. Fictional license aside, Black Friday salespeople often need to leap onto store counters to dodge buyer stampedes. Like any successful satirist, Adjei-Brennyah darkly embroiders grim realities to expose wider horror within.

His fictional mall has both a functional First Aid Station and “a designated section for (customer) bodies,” a morgue for overly conspicuous consumers.

Again, though, the line between reality and satire blurs. Who at some point hasn’t heard a someone say (jokingly) “I’d just kill for that”?

With merciless intelligence, Adjei-Brenyah constructs a nightmare landscape in which the spawn of rapacious capitalism is uncontrollable craving and the fear of not getting what you want.

In “The Finklestein five,” Adjei-Brenyah masterfully savages the terror he associates with racist violence. Once again, reality requires only a few fictional nudges to from news report territory into satire. His Finklestein five are young black youths seen as “loitering” —more likely just walking — outside made-up Finkelstein Library in Valley Ridge, South Carolina. All five are murdered.

Now, let’s backtrack. At the trial of their killer, John Wilson Dunn, both judge and jury agree the five didn’t look like productive citizens.

“Friday Black” uses contemporary social settings to then extend itself into the surreal.

This of course helps explains Dunn’s actions. Leaving the library with a stack of DVDs, his children in tow, wasn’t it natural to sense danger lurking? And didn’t he have every right to extract that chainsaw from his car trunk and defend himself? With that chainsaw he severed five heads.

The narrator of this chilling story, who brings the killings into context, is Emmanuel Gyan, who wakes each morning from the same nightmare. One of the victims, a girl named Fela, approaches him, “her neck jagged with red savagery.” He feels her “waiting for him to do something, anything.”

Today, as on all other mornings, he measures his “Blackness” on a scale of one-to-10. “Common brown” in color, Emmanuel never managed to get the Index below 4. Not even wearing wing-tip shoes, a white shirt, tie, and a big white smile make any difference. But now, after the verdict, he needs a job. His father has left in the wake of the traumatic trial, which has left wounds in the community. But his family is now depending on him to set aside his college plans and earn an income.

But it’s a white man’s world and the index must fall, ideally to 1.5, which would make him just a man with a tan. He’s in the dangerous position of hoping to pass for near-white, while still identifying with the five killed black men.

Emmanuel will eventually find a job in retail sales, but this doesn’t assure Fela’s retreat. She’s still there every night, imploring him to “do something, anything.”

In the story “The Flash,” which closes out the vibrant 12-story collection, a series of nuclear-bomb like flashes alter the human future. It’s a more sober and less fanciful approach to what lies ahead. As in all these stories, even those that take unexpected turns, human tragedy, filtered through satire, is a constant.

In a recent “New York Times” podcast interview, Adjei-Brenyah made his priorities clear. “With black people getting murdered every day, with impunity… [my] stories respond to that.”

And so they do, in a controlled, yet powerful way, reflecting the ample gifts of this compelling new voice.