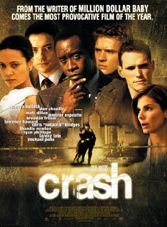 Beneath violent impulses (and violence itself) is the notion that compassion can give peace a chance. Some characters fare better than others, with Haggis bluffing to extend his story. “I’m angry all the time and I don’t know why,” says Sandra Bullock, who plays the DA’s spoiled wife. “You think you know who you are, you have no idea,” racist cop Dillon (who’s very good) tells his disapproving young partner played by Ryan Philippe (who will later commit a stunning crime). Haggis handles these predicaments with slick empathy.

But he also adds hymnal choirs to impregnate moments you’re meant to understand “matter deeply,” an annoying in an ambitious film. He’s at best with the volatile: Howard’s face-off with police is deft; and with family: Peña makes the most of a brief bedroom scene with his young daughter. As noble as Haggis is, the snippet-acting narrative is too neat and the object lessons too honed. Ambiguity is surrendered to New Age singsong (not to mention LA snow). Yes, it’s beautiful to look at, but it never breaks a sweat. Won best movie Oscar.