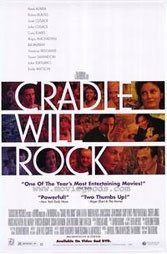 Few are the American ensemble pieces that aspire genuinely to the political portrayals. This is one. Director Tim Robbins’ wildly ambitious 1930s pastiche, which includes Congress’s wariness of the National Theater Project and Nelson Rockefeller knocks on Diego Rivera, suggests the possibility of an interwar landscape that for once isn’t owned by Al Capone or Depression drunks. He focuses on the National Theater Project’s production of “The Cradle Will Rock,” Mark Blitzstein’s 1937 musical (directed by Orson Welles) that took greedy businessmen and wicked police to task, hence the controversy surrounding its production.

Robbins uses the hubbub preceding the show’s opening to focus on the cast, including the indefatigable Blitzstein (Hank Azaria). Under fire from the House Un-American Activities Committee, NTP funding is pulled, forcing a resourceful response from producer John Houseman (Cary Elwes) and director Welles (Angus Macfadyen). The show did go on.

The film’s strength, fully-fleshed conscience and a vivid affection for the wildfire 30s, is also its downfall. Themes are skimmed over, set to music, overlapped, hodgepodged. Ensemble history collapses into ensemble caricature. American intellectual fondness for communism and socialism gets little more than a lyrical foundation and back-stories, including pro-Fascist collusion between an industrialist and former Mussolini mistress Margherita Sarfatti (Susan Sarandon), are oxygen-deprived. Bill Murray has too brief a turn as melancholy ventriloquist Tommy Crickshaw, who thinks Communists are getting all the good jobs. Not once, however, is the story without thrust or conviction.

Credit Robbins with following up on themes brought up by Warren Beatty in his 1981 “Reds,” about American journalist John Reed. “Cradle” stimulates curiosity about an intellectually rich time in which government, trying to get out from under an economic meltdown, actually pumped money into the arts, seeing it as part of the public trust. Imagine that.