Cracks in the half-full glass 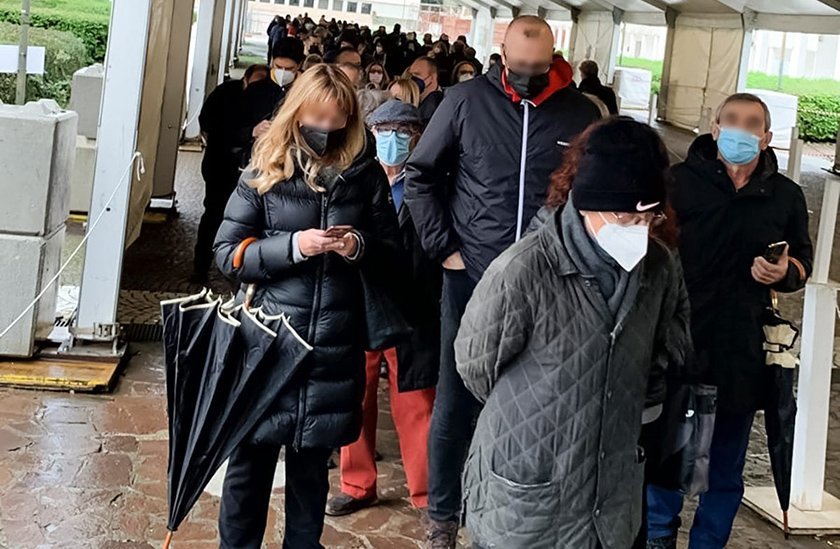 Italians are flocking to get COVID-19 boosters, but supplies may not last much longer.
I

taly’s glass-half-full status in managing the COVID assault is beginning to spring notable leaks. And unlike Britain, the country has yet to feel the weight of the Omicron variant

Virus cases continue to rise throughout the country, though the death rate has not, thanks to Italy’s high vaccination rate of over 80 percent.

Still, the United States, which had reopened toward Italy, providing a steady flow of autumn tourists, abruptly reversed its field just ten days before Christmas, announcing a return to its Level 4 “do not travel to Italy” advisory. It was yet another blow to a country that depends on tourist spending that has bottomed out since early 2020.

The Italian situation will only worsen if the government maintains what amounts to a wait-and-see attitude, seeking at all costs to avoid a new wave of lockdowns.

So far, it has slapped a €299 fine on anyone caught riding mass transit without a Green Pass, the country’s standard vaccination document. But that’s little more than an admonishment, and Italians find ways to dodge most such bullets. If day one sees a thousand fines, day ten sees only ten. So such laws are in effect unenforceable.

The only positive note of late was legislation  compelling teachers and police to get vaccinated — finally.  That law kicks in five days before Christmas.

But the real problem, as mentioned, is enforcement, and it’s as old as Latin shrewdness. Green Passes are out there by the millions but are demanded only by some merchants and some owners. Many turn a blind eye. Restaurants with longstanding customers let things slide. Who’s in any position to turn down business in a damaged economy? All well and good if this laid-backness didn’t help spread the disease, but it does.

In addition to strictly enforcing existing Green Pass restrictions, I’d seek the reinstatement of capacity limits depending on the size of the venue.

In addition to strictly enforcing existing Green Pass restrictions, I’d seek the reinstatement of capacity limits depending on the size of the venue. I’d demand indoor ventilation all around. I’d close discos, quarantine those arriving from Germany and Romania, where COVID is surging (Britain too, with Omicron), revive no-nonsense lockdown-style restrictions in the worst-Italian regions. Calabria is about to join two other small regions in the so-called high risk Yellow zone. But in reality, all that will mean is the senseless insistence that citizens wear masks outdoors and in, a measure miles from the core of the problem.

Therein the irony: Since color criteria are based on the percentages of hospital beds occupied by COVID-19 patients, troubled regions are now madly expanding their bed capacity so the numbers will seem to drop even as the number of patients grow and become desperately ill.  I say again: we are still talking about the original COVID-19, not any of the insidious variants.

Italy can seem at times like the Wild West. Every day I hear of makeshift sidewalk swab tent stalls set up by local pharmacies so people with COVID-like symptoms can be tested. Never mind that such set-ups are strictly forbidden by law to protect personnel and customers. At these test “centers” facts are out the window. It’s a business. Nurses don’t ask questions and patients lie.

The bright side is that 80 percent includes those aged 12 and over who have had at least one shot. There were 620,000 first doses administered in November, just when many feared the process had stalled. Some 240,000 of these shots were given to teenagers between 12 and 19, the other 380,000 to non-vaxxers who’d changed their minds. And — even better — the number of first doses given is continuing to rise weekly, with the number rising from 15,000 to  30,000 to 40,000 a day in recent weeks.

A major reason is the “Super Green Pass” effect: as of Dec. 6, 2021, those without a Green Pass (with the exception of people who have had the disease) cannot enter a stadium for a sports event, enter a movie theater, or a restaurant. But gyms (very popular here) are still open to anyone with a negative swab, and masks aren’t required during workouts. Again, a case of Italian contradictions.

There’s also a rush on boosters, which fully  vaccinated Italians are eligible for  starting 150 days (too long) after receiving  their second dose. In recent weeks, an average of  400,000 a day have opted to get one, in population terms the equivalent of about 2.5 million Americans making the same decission daily.

That would be good news if not for the real possibility of running  out of doses by Christmas  if the rate remains so steadily  high.

Booster-seekers have been helped by expanded hours, including some clinics that offer one hour a day service. This means the scramble for more doses is on.