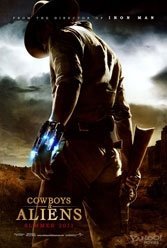 Lesson no. 1: Westerns are no place for alien abductees. Lesson no. 2: Westerns are no place for aliens (no matter how much the idea of the sci-fi Sierra Madres might appeal to special effects gold diggers). But director Jon Favreau (or someone in the graphic novel world) apparently disagreed, determined instead to create a mutant genre with tongue-and-cheek overtones. The result is a gooey mess of a movie whose only real genus is kooky kitsch. What’s surprising about all this is Favreau’s involvement. After all, he concocted the charming and witty “Iron Man” original. But while “IM1” benefited from a loony screenplay and the joyously quirky Robert Downey Jr., C&A’s downbeat Daniel Craig and Harrison Ford are saddled with a disjointed script dismally heavy on one-liners and snarling.

Outlaw Jake Lonergan (Craig) wakes up in the middle of southwest nowhere with no memory and wearing an almighty bracelet. After raising havoc in the nearest town, it becomes clear he’s been on an unwanted space vacation and that his spindly upstairs tour guides want him back. What follows is a cross between a ninth-rate “Stagecoach” and a 14th-rate “Alien.” After the space invaders swoop down dragonfly-like to rustle up more humans, Lonergan (magic bracelet in tow) teams up with aging landowner Taggert (Ford) on an alien posse hunt.

Since Taggert’s son has also been abducted, would-be enemies Lonergan and Taggert turn into reluctant allies and the onslaught of bromides begins. In the margins of the muck is Elle (Olivia Wilde), who knows (and is) more than she lets on. More to the point, she’s the story’s sacrificial love interest.

Lesson no. 3, for those interested in animal husbandry and the like: aliens make pretty good rustlers. ‘Nuff said.