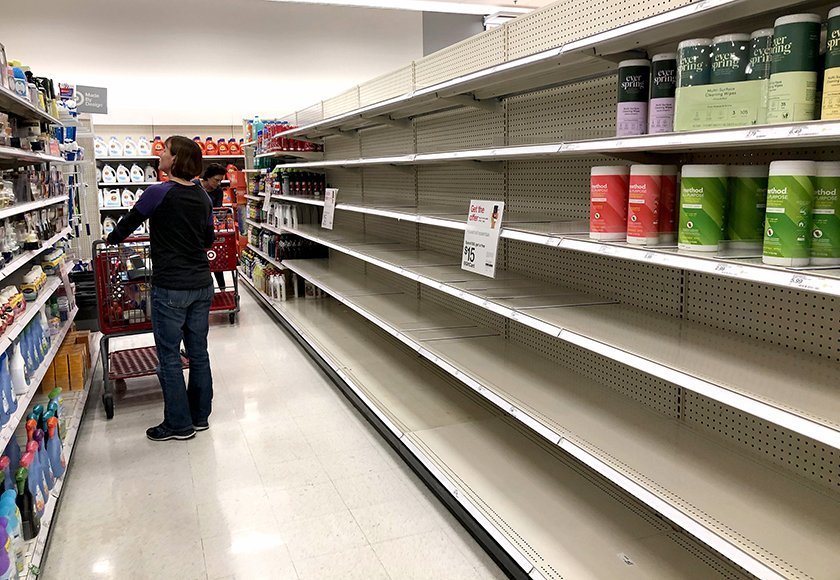 If you need to shop, go early, but no guarantees…
T

hings are happening so fast these days that I can only tell you about today, Friday, March 20, my first day off in two weeks. Fourteen days ago I began non-stop round-the-clock reporting on Florida’s coronavirus outbreak for “USA Today” and for 17 other Gannett newspapers.

Today I did my laundry, took a bike ride, and stocked up on supplies — while obsessively keeping track of the growing pandemic in the United States and abroad.

Since the Florida governor reported the first two Florida cases of COVID-19, the often deadly disease that has spread globally, the number of the infected in Florida has risen to more than 500, and the dead to 11.

All bars, nightclubs, and gyms have been ordered to close. Restaurants cannot serve food on their premises. Cities have shut down their beaches. The U.S. agriculture secretary has asked the governor to order all the state’s 20 million residents to shelter in place, following the example of California, New York, and Illinois — and most of the European Union.

On the day he announced the virus was in Florida, I canceled a trip to Italy I’d been planning for months. I’d booked charming rooms in Milan, Venice, Florence, and Rome, and was ready for two weeks of adventure. I had to tell all my hosts with regret that the trip was no longer possible. They understood.

I must get to Florida grocery stores when they first open or face empty shelves.

The Italian situation had been deteriorating for weeks. Many towns in the north had shut down, the Venice Carnival was canceled, as were other outdoor events.

Not long after, all of Italy was placed on lockdown. Country by country, most of Europe fell, as if crumbling before an invisible army.

Italy has nearly 60,000 coronavirus cases (with more than 4,500 deaths) and is rapidly approaching China, which has more than 80,000, most recorded in January and February. Next on the list is the United States at 21,000, a number growing daily. Spain, Iran, and Germany follow with more than 20,000 cases each. Army-patrolled France is next on the list.

South Korea had the second most cases but its numbers are slowing, largely because the country ramped up testing and practiced rigorous social distancing and self-isolation. Other nations with a cultural history of wearing masks during flu outbreaks also seemed to slow the infection trend.

While taking a much needed break from the long hours covering the virus, I considered what supplies I might need if I found myself housebound. I know I have to get to grocery stores when they first open or face empty shelves.

First, people wiped out paper towels and toilet paper. Then they grabbed all the hand sanitizer and bottled bleach. Next came the oatmeal, Cheerios, oat milk, and other products with long shelf lives. These include canned goods such as beans, soup, and vegetables. Pasta. Frozen vegetables. Dried beans and rice.

Produce followed. One night, after a 12-hour work day, I went to buy onion and pepper to go with the chicken. But both potatoes and onions were gone. Gone also were apples, oranges, mushrooms and carrots.

Only chayote and avocados remained.

Soon, chicken, pork, and beef vanished. I was fortunate to find a skinny hunk of London broil for dinner.

Last night, the cold cuts were wiped out.

The stores restock daily and are hiring thousands to help with the extra work. But today a grocery clerk told me the supermarket chain was just sending whatever it still had since warehouses were running out.

A produce clerk said the mass purchase of fruit and vegetables was straining farmers. Broccoli can grow only so fast.

Normally, I go to the market every couple of days. I like my dinner fresh. Maybe I pick up a bottle of wine. But the virus is upending both social norms and the supply chain.

I had to tell all my hosts with regret that my Italian trip was no longer possible. They understood.

So, today I practiced the art of defensive shopping, as if getting ready for a long camping trip or for a stay in an isolated mountain cabin. I spent $265, an amount I have never spent on a single trip to the grocery store in my life.

I separated and froze 12 chicken breasts and 8 pork chops. I will then figure out a way to freeze all the fresh produce.

At the store, I ran into an editor of mine. It was her first trip out of the house in weeks. We’ve all been ordered to work from home, and avoid the office unless absolutely necessary. It might be tempting to start the day with a cocktail, but shifting events don’t even allow you time to mix one.

The editor was stocking up on supplies for her family, driven as I was by this sudden same need to adapt to changing realities. We joked that we don’t see anybody anymore except our immediate family and friends and pets. She told me that she and a group of editors were preparing to have a “virtual happy hour” via their smartphones.

I’m enduring social contact withdrawal. I miss the camaraderie of the newsroom, the joking, the gallows humor, and the mutual encouragement. We must seek new ways to keep each other’s spirits up, collaborate, and share information, doing the very best we can because readers in these times deserve to know how to deal with what they’re facing.

For now, I’m ready to hunker down. For the evening hours I have wine, Netflix, and books.

This is my new reality, courtesy of the coronavirus.

— Editor’s note: This essay was completed on March  22.