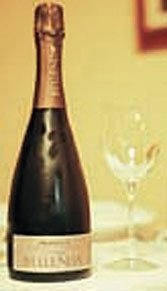 Prosecco is the Veneto's spumante.
T

he biggest problem with spumante comes from its inevitable comparison with champagne. Sure, there are some cosmetic similarities between these two cousins — the best examples of both are usually straw colored, filled with streaming bubbles, and ideally served in a tall and thin glass — but the beverages differ in their whole reason for being.

Champagne is a serious beverage: at its best it is something to be savored and pondered, like a serious love affair. But spumante is light and innocent, more like a teenage romance. One makes a statement, the other is just pleasant and refreshing.

Like most great things, spumante was invented by accident. The natural fermentation of wine stops when temperatures get very cold during the winter. When the temperature rises again in the spring, fermentation restarts, creating carbon dioxide bubbles and — évvia! — you’ve got the stuff you’ll be toasting the holidays with later this month.

According to some historians, that accident first happened here in Italy, almost two millennia before the French monk Dom Perignon supposedly invented the concept. The Roman poet Marcus Annaeus Lucanus, for example, made several references to bullulae — Latin for bubbly — served at a grand first century banquet in the honor of Caesar and Cleapatra. Other Roman writers refer to a stimulating wine called “spumat” — sound familiar?

Which helps make my point; if a wine is good enough for Caesar and Cleopatra, it’s probably good enough for the rest of us. One problem is figuring out which spumante to take home. Italy produces sparkling wine from more kinds of grapes than any other country, and the range of what’s available can be a bit intimidating. I’ve seen spumante selling for a couple of euro at my regular supermarket, and the enoteca down the street has one for sale at more than a hundred. But there are some general rules worth following to help you get the kind of spumante you want.

First, I’ve noticed a pretty big drop off in quality for bottles that sell at about eight or nine euros in a supermarket or wine shop (double that at least if you’re in a ristorante). That’s not to say that some good stuff can’t be found for less than that, or that somebody’s not bottling carbonated plunk with a double-digit price tag. But your chances of getting something good improves a lot around that level.

Also, see if you can figure out what kind of grape the wine is made from. The classic varieties are moscato if it’s from Piedmont or prosecco if it’s from Veneto. But other options abound. Just keep in mind that a producer making his spumante mostly from temperamental grapes like pinot, sauvignon, or chardonnay will probably put more care into the wine than a producer relying mostly on a hardier grape like trebbiano, soave, or malvasia.

If the bottle says méthode champenoise — the champagne method — it’s likely to be good, but the style will be fuller than the typical spumante, made from a simpler process called the Charmat method, meaning the second fermentation takes place in a barrel rather than the bottle.

If you like dry wine, get a bottle that says secco; sweet spumante will be labeled dolce and, confusingly, slightly less sweet wine will be called semi-secco (some Italian producers use the French terms: from dry to sweet they are: “extra brut, brut, extra dry — which is not dry at all — and demi-sec.) If you see the word frizzante and the bottle has a normal wine cork, it just means the wine is “fizzy” rather than “foaming,” but it can still be very good, especially if it’s a sweet dessert wine, as with Moscato d’Asti.

Almost always, the younger a spumante is, the better it is.

Once the bottle is open, you can tell how well made the spumante you picked is by looking at the bubbles: They ought to be very small and should float to the top in a steady stream. If the bubbles are large and random, and in your mouth they remind you of your last glass of Sprite, then that’s not a good sign. Regardless of how sweet the wine is, look for a delicate balance between sweetness and acidity — a sure sign of something good.

I read something once that said that in order to serve dinner to everyone in the world at once with only one beverage choice, the best bet would be a good spumante, because it is so versatile and accessible.

Mix prosecco with a bit of peach nectar and you’ve made a Bellini, the famous Venetian aperitif. And if someone knows a better way to end a meal than with a spumante dolce, I’d like to know. During holiday meals, spumante’s acidity makes it a good match for traditional turkey with any rich sauce, and in Italy almost everything with a cream sauce is usually improved by a nice dry spumante. Grilled fish, cured meats, all but the heaviest risottos, and most soups are all good partners. And while mild and firm cheeses like stracchino are classic matches, I also like the contrast between the bubbles in spumante and a healthy sliver of pecorino.