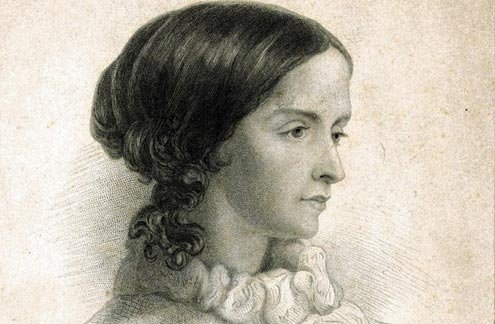 earn to love not only Italy, but the Italians,” Giuseppe Mazzini beseeched his faithful friend, Margaret Fuller, when the two parted in London in 1846. Mazzini’s appeal cast a spell on Fuller, the Boston-born transcendentalist, lecturer, journalist, and celebrated author of America’s first feminist book, “Women in the Nineteenth Century.” She immediately began scheming to get the Genoa-born Italian nationalist back home.

At the time, Fuller was the New York Tribune‘s first woman foreign correspondent, hand-picked by the paper’s inimitable editor Horace Greeley, while Mazzini was the exiled leader of the “Young Italy” movement, whose members sought to unify Italy into a republican state. Mazzini had fled to London in 1837 after a failed insurrection yielded the death sentence.

Though the fiery Fuller, a socialist backer of abolition and prison reform, eventually abandoned her audacious plans to sneak Mazzini back to Italy, she still saw him as an ideal patriot. He was among “the heroic, the courageous, and the faithful,” she wrote in a rhapsodic Tribune dispatch. Mazzini was just as taken, calling her “one of the rarest of women in her love and active sympathy with everything great, beautiful, and holy.”

When Fuller first traveled to Italy in 1847 the unification struggle, known as the Risorgimento, was already raging. The fractured peninsula contained eight political states rule by either Austria or the Vatican, with Pope Pius IX managing the Papal States, including Rome, as a theocracy. Fuller dove first-hand into covering the revolt (while also dropping off letters to Mazzini’s agents in Rome). From her Rome apartment overlooking the pontiff’s Quirinale Palace, she saw the Swiss Guard fire into a group of republican demonstrators who retaliated by setting the papal palace ablaze. Around her, she wrote, were “the broken windows, the burnt doors, the walls marked by shot, just beneath the loggia on which we have seen [Pius IX] giving the benediction.”

Amid this tumultuous backdrop, she fell in love with Giovanni Angelo Ossoli, a nobleman whom she had met by chance during Holy Week in St. Peter’s Basilica. The 46-year-old Fuller was a decade older than Ossoli, who came from an aristocratic family with close papal ties and was a soldier in the city’s civic guard. But Ossoli was also a closet republican and an admirer of Mazzini.

But politics played little part in their affair. Fuller was an incomprehensible figure to some of her American male peers, “less American than Greek,” wrote Connecticut-born educator and philosopher Amos Bronson Alcott. According to historian Joseph Jay Deiss, Ossoli by contrast possessed “an intuitive understanding of [Fuller] as a woman. He was able to provide the human warmth the Puritan moralists lacked.”

Ossoli hid the relationship, aware that public knowledge of an affair with a poor New England Protestant with a radical streak could lead to his disowning. Fuller’s pregnancy intensified the anguish. She absconded to Rieti while Ossoli, tied to his duties, remained in Rome. They worked around papal censors to exchange love letters. “I will be waiting for a sign to come straight into your arms, before they deprive us of even this pleasure,” Ossoli wrote. Their son, Angelino, was born on September 5, 1848.

Desperate for money, Fuller left Angelino with a foster family and returned to chaotic Rome in November to resume her Tribune dispatches, and to continue gathering material for a planned history of the birth of the Italian Republic (Mazzini and Ossoli’s connections were excellent resources). Three months later, as the violence peaked, Pope Pius IX, disguised as a priest, fled to Gaeta under the protection of the Bourbon king of Naples. On February 9, 1849, Rome was declared a republic, with Fuller summarizing the mood: “The Pope, the cardinals, the princes are gone, and Rome is perfectly tranquil. One does not miss anything, except that there are not so many rich carriages and liveries.”

The triumphant Mazzini arrived in Rome on March 5 and, with Carlo Armellini and Aurelio Saffi, was appointed as one of three leaders of the new Rome Republic. In Fuller’s eyes Mazzini was more god-like than ever. Of his March 8 visit to her home, she wrote to her friend, Marcus Spring: “I heard a ring, then somebody speaks my name; the voice struck me at once. He looks more divine than ever, after all his new, strange suffering. Freely would I give my life for him…”

But republican revelry was short lived. Pius IX enlisted the aid of 30,000 French troops, which surrounded Rome in what would come to be known as The Siege of Rome. General Giuseppe Garibaldi’s troops, including Ossoli, defended the city with their backs to the Janiculum Hill. Fuller repeatedly braved the horrific fighting to visit her lover at his post.

Princess Cristina Belgioso, another revolutionary figure, appointed Fuller as supervisor of the Fatebenefratelli Hospital. “Since the 30th of April I go almost daily to the hospitals,” Fuller wrote in June to her old friend, Ralph Waldo Emerson, “and, though I have suffered, for I had no idea before how terrible gun-shot wounds and wound-fever are, yet I have taken great pleasure in being with the men. There is scarcely one who is not moved by a noble spirit.”

Rome fell to the French after nearly a month of fierce resistance, with revolutionary supporters retreating from the battered city. Fuller captured the somber exodus, led by Garibaldi, in a moving Tribune dispatch: “They had counted the cost before they entered on this perilous struggle; they had weighed life and all its material advantages against liberty, and made their election; they turned not back, nor flinched, at this bitter crisis.”

Mazzini fled Rome with an American passport secured by the ever-devoted Fuller thanks to her friendship with Lewis Cass, Jr., the American Chargé d’Affaires to the Papal States. Reunited with their son Angelino, the couple escaped to Florence where they were secretly married. But financial hardship grew and they decided to return to America. On April 6, 1850, Fuller wrote her friend, the Marchioness Costanza Arconati Visconti: “I am absurdly fearful and various omens have combined to give me a dark feeling … It seems to me that my future upon earth will soon close … I have a vague expectation of some crisis — I know not what.”

On May 17, the English barque “Elizabeth” began its five-week voyage with the three family members on board. At about 3:30 a.m. on July 19, just off of New York’s Fire Island, the ship struck a sandbar and began sinking. Fuller and Ossoli perished. Gone too was Fuller’s manuscript for her history of the ephemeral Rome Republic. Only Angelino’s body washed ashore.