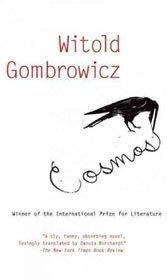 By Witold Gombrowicz, translated from the Polish by Danuta Borchardt

“Cosmos” is a tale of adolescent self-absorption that Polish prankster Gombrowicz (1904-1969) expands gradually to included all manner of metaphysical musings, social and sexual, but with bizarrely appropriate emphasis on masturbation (to “voluptualize” oneself) — since, after all, the teen-ish self is swamped with obsession, confusion, and hormonal proliferation. If this sounds arcane, it’s not. Gombrowicz’s novel is sly and wry; it humors without burdening. His narrator (a thinly disguised self) and college mate Fuks, the former escaping the oppressive parents, the latter an annoying boss, take summer refuge in a rural pension. Both want to kill time. The agitated young men fixate first on a dead sparrow, conjuring up a whodunit. Then comes the housekeeper, whose deformed mouth becomes the obscure object of narrator Witold’s desire. Running rampant in the pension are all manner of caricatures: a stuffy husband, an aloof wife, a fat housekeeper, and a beloved house cat named Davie — which Witold will strangle and hang in a “comic” fit of sexual rage (“…one murders when murdering becomes easy, when one has nothing better to do.”).

It’s boys will be boys trying to make sense of the asphyxiating adult world from which there’s no escape except submission or applied absurdity. Snooping Witold chooses the latter. For those curious enough to reflect on its constant incidents and coincidences, daily life is madness-making — “…one is already buried under a heap that is unlimited, immeasurable, innumerable, impossible to encompass.”

Poland was under Communist rule during Gombrowicz’s writing years (though he lived in Argentine exile), which seem to give smalltime sleuthing and masturbation an ironically universal sweep. What else is there to do? Though the cosmically challenged narrator’s would like to think of the world as big and broad, and he a healthy member of the hearty race, all he can focus on instead are mouths and cats, arrows and sparrows. It’s an amusingly claustrophobic predicament. Thankfully Gombrowicz wrote long before cyberspace and social networking or else his alter ego would have lost all bearings, swamped by the democratic chaos of connection.