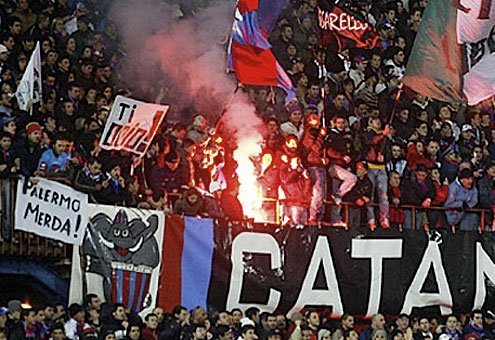 The ultras revel in Nazi symbolism because they’re the spawn of fascism’s squadristi. It’s a rite of dissent and belonging.
H

Host: “Welcome back. We’re now joined by Christopher Winner, the editor and publisher of The American magazine in Rome, Italy. Hello, Christopher!”

Host: “Does it rain a lot in the Eternal City in winter?”

Host: “Well, nothing like the cold spell here. No snow over there?”

Host: “You have mountains?”

Guest: “There are mountains, yes, and rivers…”

Host: “Indeed, the Tiber. So, Christopher, tell us: I guess they’re playing soccer games over there but the fans are not being let in because of violence outside a stadium in Sicily that left a police officer dead. Do I have it right?”

Guest: “Yes. All the games will be played but some behind closed doors, no fans…”

Host: “No fans, no violence. That’s the reasoning…”

Guest: “The reasoning is to demand that stadiums adhere to building codes that call for proper separation rival fans: opposite-side entrances, security cameras that actually work. It’s essentially a kind of systematic fan segregation for the greater good. Some smaller facilities have limited capacity but over the years owners have just closed their eyes and opened their doors. Now, the government is saying: ‘If the stadium seats more than 9,999 it has to be up to code. And don’t cheat saying it doesn’t.’ Many do cheat. But, truthfully, many fans don’t even know what the codes are, so the confusion deepens.”

Host: “But, tell us, what’s really at the root of this? I mean, why all this fan violence. Italy seems to me peaceful enough country.”

Guest: “Soccer is among the most lucrative industries in Europe and the world. Like any industry, it has a bright side and dark side. The dark side is its underworld. That underworld comprises fans that consider themselves members of a ‘Fight Club’. As such, they see the Saturday or the Sunday game as a weekly date where they can go at it with police or other fans. It’s unconnected to the game as such, but it is an assertion, an institutionalized adrenalin surge. Something of the same went on the Britain, but it was often fueled by alcohol. This is more insidious and interesting, if you will, because alcohol isn’t a component. These are mostly teenagers and their mentors picking big fights. It’s ritual violence under the rubric of soccer…”

Host: “Not exactly ‘Under the Tuscan Sun’…”

Guest: “What people often fail to account for is history. Under Mussolini, the Fascist regime needed tough guys. So it went into smaller cities and towns and recruited thugs. It made them “black shirt” Fascists, gave them smart-looking uniforms, and anointed their mission with official zeal. They then went around and sought out real and pretend enemies and beat them up, even killed them. The soccer hooligans are called ultras; the Fascist thugs were called squadristi. And squadra means members of a ‘team’. They were the official anti-order recruited by order itself, a perfect synergy. Now, there’s no longer an official anti-order. But that doesn’t mean that in smaller places where unemployment is high and there’s not much to do, an anti-order can’t take shape around a soccer team, which in this case substitutes for a regime. Suddenly, you have young male fans going to a small stadium hoping to riot. The game matters, sure, but its sometimes a side-dish to authority bashing.”

Host: “But you don’t see this in, say, Rome or Florence…”

Guest: “Florence has some of the fiercest fans on the planet. It’s the other side of the romance novel. Italy is delicately rigged and the North-South divide is real. There’s city-state passion, ‘don’t mess with us’ passion, and guitar-smashing theater. In some regions, there’s Thirteen Colonies logic, the kind that led New Hampshire to come up with its famous ‘Don’t tread on me…’ motto. Mix and match the rages and rivalries and you emerge with a squadrista mentality kept alive and honored by these ultra fans. That’s what scares the government. That you can’t just close the pub, so to speak. The ultra netherworld depends on a highly organized scorning of authority.”

Host: “Sound a lot worse than just about soccer…”

Guest: “The point I’m making is that it’s only tangentially about soccer. Just as violent no-global protestors are only tangentially no-global. These are rage channels. The United States makes a big point about road rage and anger management, and so on. These non-fans are the representation of anger and road rage organized into tribal cadres, with chieftains, lieutenants, rules, rites of passage, and specific designs. Little is random. Again, what was the Mafia first called? Cosa Nostra. Our thing. This is an entity, a frat, a club, a militia, a way of belonging that puts you on the map because you’re in opposition to some central order. It’s about virility without needing to say so. Soccer is the lightening rod, of course, and the ultras also want the game won. Aside from the game itself, there’s rage about player signings, about allegedly rigged matches, about plots from soccer officials — who work in Rome, of course. When the Florence team sold its star Roberto Baggio to the Juventus team 20 years ago, the city rioted. And by the city I mean both citizens and these soccer militias. No one died and so the headlines were smaller. But Italy’s self-esteem has been in tatters for years — this isn’t a place you’re proud to be from except when you win the World Cup. So the ultras ensure that they’re present and accounted for as a militia alternative, and making a sniper’s difference through force.

Guest: “To be on the map. To be enfranchised their way. Law-enforcement can be a relative concept in Italy. Many are convinced that law can be bypassed if you’re powerful enough or clever enough. The fact that several of the more powerful teams involved in the country’s recent match-rigging scandal had their penalities quietly reduced illustrated this. The government can close stadiums and make all sorts of promising murmurs about working to ensure safety, so can soccer officials and millions of ‘good’ fans… The thing is that this entire story is about subculture, not just random violence. Some extremist fans consider themselves accessories to the team itself — braving bad weather and traveling to watch it play — and expect preferential treatment from club officials, not legislation they perceive as slighting to them. Soccer’s vicissitudes are conversation-generators that cut across social and economic class. For example, there are dozens of 24-hour talk radio channels. Everyone can jump into the argument. But not anyone can impose their will and draw mass attention, literally make breaking news — and obviously TV images do play a role. Part of the subculture is driven by self-importance and the need to challenge authority at every turn. It’s a narcosis. People say, ‘Oh, soccer should be a family game, where you can take your family.’ Maybe, but it’s not. It’s still ruled by no man’s land principles, where someone can pop out of a trench, gun blazing. The key word is ‘can,’ that you can call attention to your existence, which in submissive Italy is something most people are either unable or unwilling to do.”

Host: “Don’t these kids have computers?”

Guest: “Many are far from kids, and computers are anti-social. This is social, hierarchical, and yes, sometimes organized through cell phones and emails. What triggered the recent round of dismay was an incident between two Sicilian rivals, Catania and Palermo. Those are two tough urban neighborhoods. Again, lots of idle rage. Look at the footage and you see the hoods and the eye-slits — a ‘uniform’ similar to the ‘no-detection’ British hooligan outfit popular in the 1980s. In 1975, the hood and eye-slit wearers were ideological ultras, students and agitators battling police allegedly because they supported leftist causes. Here, you see the same thing, identical, but it’s allegedly about soccer. Until Italians acknowledge more openly that it’s about more than soccer, you’re destined to have incidents no matter what you do about the stadiums. After the policeman died, graffiti appeared on Catania walls: ‘We’re sorry we just got one…’ and ‘Next time 20…’ and so on. Gandhi and King were proud of their non-violent movements, and rightfully so. They knew that most movements that promote dissent usually want to exercise the same kind of cruel power they imagine their adversaries having control over. It’s fighting that compensates for envy.”

Host: “Have you ever seen soccer violence close up?”

Guest: “When I got to Rome in 1975, the city’s Olympic Stadium still had rows and rows of lean wooden benches. The ultras of that period picked fights with police by setting the benches ablaze. The police would then respond with tear gas. Sometimes the stadium was literally gassed in; you couldn’t see or breathe. No games were suspended because the soccer ultras were outnumbered by their ideological counterparts who were provoking far more serious riots in Turin, Bologna, and Milan. The ultras seemed a little pathetic and the police and government had its hands full with political situations it considered far more serious. Now, with ideology gone from the mainstream equation, the ultra-fan is the only hardcore dissenter left in Italy. To use the American saying…. ‘They rule,’ or want to think so…”

Host: “Thank you, Christopher Winner, editor of The American magazine. I hope the sun comes out there soon.”