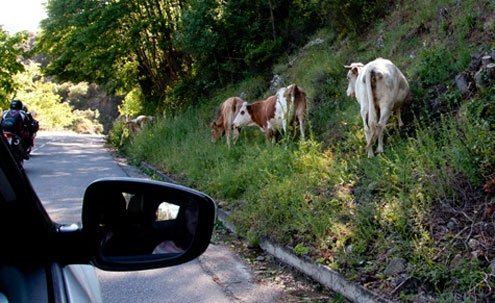 Corsica: A sense of beauty, the surreal, and of menace. Photos by Amanda Ruggeri.
N

o travel writer likes using the adjective “breathtaking.” But on a recent vacation to Corsica, a Mediterranean island of snow-capped mountains and sparkling sea, bizarre rock formations and sandy beaches, the word crossed my mind more than once.

At one point in a road trip through the island’s craggy mountains, needing a break from the harrowing hairpin turns, we pulled over next to a gorge. The scene couldn’t have been more idyllic. The sky was blue, the mountains majestic; there wasn’t another car in sight.

Until we looked down: Far beneath us, a white sedan was crumpled up like a used napkin. There was no need to wonder if anyone had survived. At the next sign of civilization, a tiny village 10 miles away, we stopped at a café and asked whom to notify. The server shrugged. “Cars go off into the gorge all the time,” he said. We went to the fire station. Yes, the officer said, this did happen all the time, but they didn’t know about this particular accident.

We white-knuckled the rest of our way out of the mountains.

Few other sights on Corsica were as harrowing as that car. Throughout the trip, though, I kept sensing that something sinister underlay the island’s idyllic beauty.

Take the farm animals. Pigs, cows, goats, sheep, even horses roamed free, including on roads. At first, I was tickled: There’s a kind of surreal hilarity to turning a curve on a highway and seeing not an oncoming car but a pig, trotting and gloomy in a sudden island downpour. Many of the animals didn’t belong to anyone, which gave the island a sort of “Watership Down” feeling. And then, on a picture-perfect beach, a friend returned from a walk to report that the lump further down wasn’t a rock. It was a dead cow. Ah, right. The downside.

I later found out that the roving herds often caused serious road accidents, and more. In one incident, a bull charged and gored an elderly woman.

Then there were the road signs. Across the island, signs gave two names for every town: one Corsican, one French. In the island’s separatist-leaning interior, in towns so quiet the only sound we heard was church bells, the French names on the road signs were covered by graffiti. On the one hand, it seemed like an idealistic if charmingly ineffectual attempt to take Corsica, an island three times the size of Long Island, back from the French. (Let’s not forget that Napoleon Bonaparte was born here).

But it was more than a quirk. Corsica’s National Liberation Front (FLNC) has been violently active for decades, often targeting foreigners. In just 10 weeks in 2012, the FLNC bombed more than 30 holiday homes.

By the time I left, I’d fallen in love with the island whose dark side seemed to lurk behind every moment of beauty, a feeling I’d never experienced so strongly in a place before.

And then I spent a night in Paris, where I wasn’t supposed to be at all. But my 10 a.m. flight from Corsica to Paris was delayed so long that I missed my 8 p.m. Rome connection. I thought at least my friends and I would have a pleasant dinner and put the strangeness of Corsica behind us. And we did.

But in the cab on the way home, our driver immediately launched his own set of worries about anti-gay marriage demonstrations set for the next weekend. “And did you hear about the man who blew his brains out in Notre Dame cathedral?” he asked. Yes, we had.

The driver mimed shooting a gun. “He fired his gun, and then, with half his head missing, he staggered around after! And then…”

“Okay, okay, we got it,” someone said swiftly.

I wasn’t sure whether to be more disturbed by the fact that this had happened outside Notre Dame, or that the taxi driver was so entertained. Luckily, we arrived at my friend’s apartment before he could go much further: safe at last, or so we thought.

That night, at 2 a.m., our buzzer rang. Another friend traveling with us but staying on the other side of the city had been jumped and mugged.

It wasn’t just Corsica. Or Paris. It’s life, of course. And life folds in a gorgeous beach and a dead cow, a deep gorge and a crushed car, a stunning cathedral and a horrific suicide, a night with friends and a street crime.

Maybe just to encourage you to focus on the beauty of the beach.