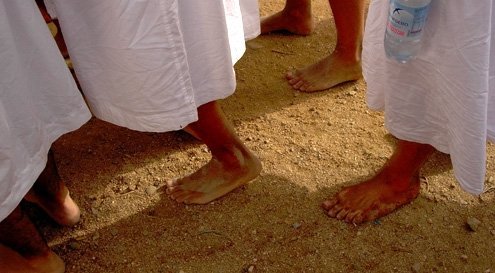 A run that's hard on the feet. Photo by Manuela Mura.
&

#8220;Sei cattolico?” the widow asked. “No,” I replied, averting her stare. She looked away toward the town’s mayor at the head of the table, and leaned into me hard. “Ma, tu corri con fede?”

It can get thorny when you try to justify your faith while being grilled by a recently widowed woman who brings two rosaries to a potluck dinner. Had it been any other occasion I might have brushed aside the questions, but it was the Corsa degli Scalzi in San Salvatore, and I was an American Quaker standing barefoot wearing an abidu. I had some explaining to do.

San Salvatore is a pint-sized village whose narrow dirt roads are lined with rows of squat Mexican hacienda-style houses. You can almost hear the theme of “High Noon” as you enter its dusty square. The village was the backdrop for a handful of 1960s “spaghetti westerns.”

It lies abandoned all year until it wakes in late August as families from the nearby fishing town of Cabras make the pilgrimage to their stout domigheddas (“little houses”) to celebrate the novenario, a nine-day feast in honor of San Salvatore.

The festival culminates the first weekend in September with the Corsa degli Scalzi (The Barefoot Race), a poignant spectacle commemorating a Saracen pirate attack in 1506 that forced Cabras’ faithful to haul a local statue of the Savior to its San Salvatore shelter and out of harm’s way.

Since then, the “rescue” is recreated at dawn on the first Saturday in September. Hundreds of barefoot men don long white tunics (abidus) and run seven rocky kilometers from Cabras to San Salvatore bearing the statue aloft. They return Sunday at dusk.

The more my Cabrese friend Andrea told me about the tradition, the more I found it intriguing. I finally asked if I could participate. He explained that no American had ever run before — especially a non-Catholic. I had to await a decision from his uncle, the town’s mayor. Leave it to Italians to mix religion and bureaucracy.

Two weeks later he called. Some opposed my participation, he said. At the same time he noted that the event was intended to promote acceptance. In fact, San Salvatore’s religious centerpiece, its inconspicuous church, has underground vaults with ink drawings of Punic, Christian and Islamic origin. They read like a chalkboard of Sardinia’s tangled spiritual timeline.

The mayor agreed to let me run but offered advice that sounded more like marching orders: “Run close to me, don’t open your mouth, and prepare your feet.”

At 6 a.m. Saturday morning all able-bodied Cabresi and one American shuffled into church in a sea of 700 white mantles to hear Mass. A chime of the campanile sent us into the street. We broke into two ranks before a throng of onlookers.

Suddenly, an elderly man cried, “Currei in nomin’e Deusu!” — “Run in the name of God!” — and off we went. Four squat lads bore the bouncing simulacrum as far as they could before stopping to change hands as the rest of the pack followed. The runners, is curridoris in dialect, wailed devotion and forged ahead.

After two kilometers on smooth-painted median, we moved onto the Camminu de su Santu, a dirt path lined with pebbles sharp enough to slice bare skin. We continued chanting as tourists and their cameras raced after us, but our numbers dwindled. All around me, men my age and younger were keeling over to pick the shards from their bloody feet.

I later asked the mayor why the elder runners didn’t seem to suffer. He told me that his generation was too poor to afford shoes until adolescence.

We arrived in San Salvatore to a hollering crowd that offered us roses and amber vernaccia wine. I seemed to be the only one looking for sandals.

The vernaccia flowed well into the morning as Cabras’ 10,000 residents flitted between the open doors of the hobbit-sized homes.

At first, I was hesitant to follow Andrea’s lead inside. I was the foreigner after all. But when I was recognized from the run I was greeted with handshakes and refills.

The Sunday rientra is a strenuous and far more moving affair observed by nearly twice as many spectators. The dirt path was now littered with the shattered remains of Saturday night’s revelry. An ambulance was poised at the beginning of the sun-baked asphalt. The battering of feet and the roar of the curridoris‘ chants amplified as we approached Cabras. Our once-compact unit broke into a full-throttle sprint.

As we arrived before the parish church, a mass of runners swarmed the statue, some weeping, some praying, and others silent — each expressing their sacrifice in their own way.