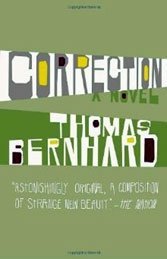 By Thomas Bernhard, translated from the German by Sophie Wilkins

Easy enough to lump Bernhard’s masterpiece into an arcane corner of Teutonic philosophical fiction, that palatial dungeon of intelligence where ferocious, rip-roaring minds mysteriously tear off scabs to make bleeding into saying. But no one wound, let alone a genre, so commandingly ignites the literary infinitive. Suddenly, “to be or not to be” is a real and raging question confronted by an intellectual genius, Bernhard (1931-1989), whose sadness is matched only by his lust for life.

Framework first. An unnamed narrator sulks into a garret room in the Austrian countryside where his best friend Roithhamer, who recently hanged himself, lived, worked and for to develop and build an elaborate coned-shape forest dwelling for his beloved sister, who has also died. The garret, “the meditation chamber,” is located in the home of a mutual childhood friend who left Cambridge mathematician and geneticist Roithamer, a self-described “contrary, refractory, quarrelsome character,” to his own increasingly obsessive devices. The narrator opens by bemoaning the shocking loss of his friend, to then shift into a fearsome accounting of Roithamer’s life and mercurial times, finally borrowing wholesale from his final work, an screed-style recitation so corrected it exists through negation. “Roithhamer,” says the narrator, “was the kind of man who had to create a reality, always a reality, out of what he had first only imagined, to make it a fact…”

The claustrophobic framework, filtered through Bernhard’s rhythmic and repetitive prose, acts as a magnifying glass that burns a beam on lives of men, and mankind; on mothers and fathers; on politics and society; on the meaning of meaning, or its absence (“…uncertainty has become a chronic condition…”)

Austrian Bernhard was devotee of Ludwig Wittgenstein, and the story borrows liberally from the details of the philosopher’s life: He had a beloved sister, built a home for her, worked in Cambridge, loathed modernity, and sifted monastically through the glory that is hopelessness of overly intelligent life. Self-realization and perfection, once achieved, have no choice but self-destruction, since the world cannot comfort their eccentricity. “Everyone has an idea that kills him in the end,” says Roithamer. Not a sanguine analysis, but the hope is in the telling, which Bernhard makes into melody unlike anything in either philosophy or literature, a inimitable amalgam for the ages.