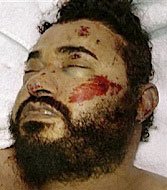 here he was, Zarq, doing his best Che Guevara impersonation, which is to say dead. Death modeled as a sure thing is the most exciting pornography on the planet. Think Mussolini on the meat hook, loathed upside down in Milan; see popes on graded catafalques, their chalky pallor mongering for awe; consider the bones of the infinite fallen in a wartime field, their bits and pieces examined and venerated. Enemy slabs are industrial strength basic instinct when options run low. The Bolivians, thrilled to trap and execute Che, trotted out their trophy snaps and dined on incoming applause.

But I’ll stay on point.

Here are amoral lessons for the future Zarqawis, those who would gradually bloat themselves — media complicit — into Godfathers.

First, don’t mess with Jordan. Particularly if you’re of Jordan, even if only in part.

Don’t fuck with the Sandhurst-Hashemite scepter, that enduring amalgam of empire redress and Middle East smarts.

Do not profane, through bombings and sundry, the memory of the one regional player who knew the game of shifting allegiances and played it masterfully for four decades, King Hussein. He could love and despise Jews and Palestinians alike, leaving the room with military academy honor (Sandhurst is Britain’s West Point). He did not, like Osama’s loathed Saudi kings, flirt with the scurrilous. He was a cold-blooded nationalist without being a secular tyrant, an improbably elegant combination in territory so curdled.

Zarq’s Amman atrocity — blowing hotels and lobby walkers to bits last November — was the first and last profanity he couldn’t afford, the sidebar rave that cost him dearly. His death is a pinch hit from the king’s old guard, making things right, or at the very least avenging a wrong. If you don’t think that’s the game, think again. Take a year if you need it.

Yes, U.S. planes and bombs did the actual job; yes, an Iraqi prime minister announced the kill. But the bearings that came to the hunters came from Amman, courtesy of deep throat leaks, cash, and payback.

What this says is relentlessly simple: the regional equation — Iraq, Iran; Shiite and Sunni —will be decided by its inner and borderline players, white hats and black (and a good many grey). The military structures built to contain insurgency will not hold unless those players — the second-wave Zarqs and the enemies— believe the situation is in their hands to make or continue to break. Few leaders installed under the American occupation will outlive the tainting associated with perceived collaboration (call it unjust, call it unfair). They will be murdered either by radical Muslims or nationalist agents acting in their name. The critical if threadbare line that separates religious radicals from political opportunists is destined to fray more terribly in the months and years ahead. Alleged American and British atrocities against prisoners, an accepted part of internecine strife, is lighter fluid on a thousand embers; expel the aliens who fondle genitalia, who have a fondness for what the region can’t abide: adult male humiliation.

Truth of these complications is contained in the gloating over Zarq’s corpse. One leader speaks of “turning corners,” another of “justice served.” Neither lives in the bloodied neighborhood. Corner turning is what you do in the American suburbs; justice is what you apply under rule of law. Neither suburbs nor law apply in Iraq.

Zarq’s corpse, finally, is no more than evidentiary proof that something called an enemy, a something with face and girth and pulse, can be killed, and the killing made literal to a “coalition” audience numbed to the idea of winning, let alone being of the willing. Among the few monsters known enough to poster up and bounty, Zarq is now in town for all to see. It’s frontier logic, a dead man hauled into town on a sagging horse.

Saddam Hussein’s capture rang up squalor and pathos — the ditch man, pleading. It was unsatisfying in the extreme given two years of rallying cries. The shrewdest of the all, Osama, has no Jordanians arrayed against him — Pakistan wouldn’t dare give him up, and hasn’t. It fears for its collective health. More precisely, its general fears for his. Not even the cash flush, used effectively in Afghanistan, has scared up state’s evidence.

So Zarq will have to do for now, a Billy the Kid for the outlaw counters. Do you read sympathy for the devil? Nothing of the sort. It’s just that the more desperate you are to put a face on a dead enemy the more evident it is that most of the enemy isn’t foolish enough to present such a face. Most lay low, zealous and conniving. Zarq’s Western vanity undid him. Look what I did! Look who I am! Look at me on film! I can blow up downtown Amman to eat away the infidels.

Nossir, Zarq, no can do.

All the king’s horses and all the king’s men, the king’s son in charge; and see what happened, Zarq? You had a great fall. I could have told you.