Corona “world-closing” not the answer 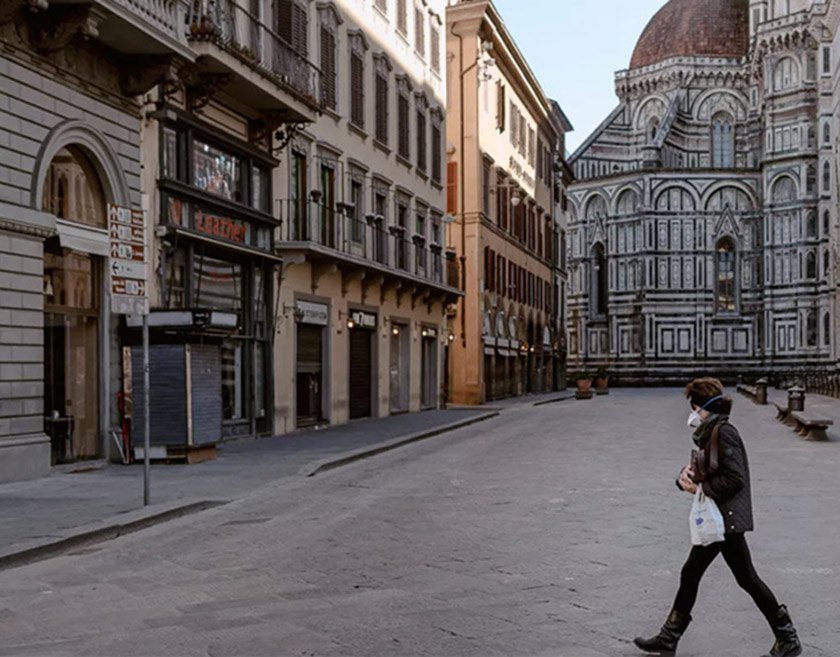 Florence remains mostly empty, but backlash may be brewing. Detail from a photo by Francesco Spighi.
T

oday in Florence, returning from the grocery store, I saw carabinieri (Italian paramilitary police) officers driving over the walkways in the park I was crossing. They admonished several parents of children running around the playground, telling them to go home.

Watching this scene, I couldn’t shake the nagging feeling — and it’s been growing inside me for weeks — that humanity is going about the matter of confronting the coronavirus not only the wrong way, but also in a highly detrimental one. Not detrimental to me, but to the planet as we know it.

One would rightly assume that to battle this challenge, science and logic would be the primary weapons. Yet the available scientific (and medical) information remains at odds with itself, and logic was thrown out entirely long ago.

Are we going to sink the global economy to battle this virus? It appears we are. Are we going to ruin untold millions of people’s livelihoods to protect a small portion of the population? Yes we will.

Will we not at least consider other options? No, we won’t.

The politically correct crowd has stifled any potential debate on the possible options. Now there’s only one: close the world. If you raise questions (never mind doubts) be prepared to be pilloried, and accused of failing to value human life.

But I’m prepared for the assault, and so I begin. Let me start with a few points.

First, to label cruel and inhumane the idea of creating a kind of social triage in which levels of urgency are assessed and priorities set is by itself cruel. Such priorities — what is and is not humanly acceptable — are already in place the world over. Societies make all sorts of life and death decisions every day, creating scales and tolerable limits. Some of these scales are so built into life’s ways and means that they’re hardly mentioned. The examples are endless, but let me offer just one.

The existing approach to the virus is detrimental to the planet as we know it, and in the long haul will hurt children in particular.

In the United States alone more than 43,000 people a year die in automobile accidents. Let us (again) agree that every human life is priceless, and worth saving.

So, in an effort to save these useless 43,000 deaths, let us create a federal speed limit of 5 mph on every road. Problem solved.

Silly, of course, since businesses couldn’t transport goods in a timely way. It would take hours for buses to deliver kids to school. People would spend an absurd amount of time driving to their local KFC for a bucket of dead animal parts (yes, I’m a vegetarian).

The 5 mph solution, in sum, is impractical on many levels.

But so is the solution (assuming it is one) being applied to the coronavirus pandemic.

Back to the speed limit: America has determined that daily convenience and travel is “worth” 43,000 deaths a year, not that anyone wishes these 43,000 dead, but they’re part and parcel of the right to drive freely. (Every country makes the same value judgment, as no nation has a low speed limit.)

America may admittedly be the poster child for this way of thinking and rationalizing. After all, it has also determined it will allow thousands of its own children to die in school shootings so its citizens can “enjoy” the right to own guns, a constitutional right.

The planet has also long made the same determination regarding diseases and the risks they pose. In an average year, for example, the U.S. suffers some 18,000 flu-related deaths, about 50 per day. The fatalities are overwhelmingly elderly and infirm people. Why aren’t these lives cherished?

Should we not, all of us, distance ourselves from these sick people? Should we not quarantine these ailing folk at home the instant they show the slightest hint of illness to avoid the contamination of others?

Should we not also wear protective masks, since we stand a chance of infecting others, including the young? Remember, the number is not 80 or 800 but 18,000.

More to the point, behaving in this way would be impractical.

Those who object will say, “That’s fine but the coronavirus is different. It’s more than just any flu.”

But based on the speed limit logic, which factors in 43,000 deaths, it’s not at all different.

What is true is that numbers matter, and in the case of the virus the potential numbers of victims has overhauled conventional decision-making. The world is essentially grinding to a halt because a million Americans, not 18,000, might die. The potential death figure in Iran is four million. For now, Italy has the highest death count, nearing 4,000, but with its huge elderly population that figure is paltry, particularly considering the virus made its Italian “landfall” in early February.

Again, these are projections, but, like the figures once associated with nuclear war, they carry a potent impact.

Based on the examples mentioned above, a million highway deaths per year, or 10,000 children murdered in schools annually, might force government to radically alter existing policies. But for now, the toll just isn’t high enough.

It is these projections – no reflection, for now, of the actual number of sick and dead – that have intervened to cause swift and massive policy changes, including closing borders and forcing citizens to stay home.

This brings me to the most critical (and least “correct”) virus-related question: what is less impractical, to suffer the incalculable pain of stopping the world in its tracks or to consider adopting alternative (not necessarily pleasant) strategies, such as putting those most at risk in quarantine?

Woe betide anyone who dares to hint at such an idea. That person, in these times, is by definition inhumane.

Yet tens of millions of workers worldwide won’t be paid as long as this siege goes on, never mind government assistance plans, which never quite play out the way they’ve been advertised. Without steady work, these people will struggle to feed their children — and one in three American children already eat food unsuitable to their health and growth.

The virus closures and slowdowns have already reduced shipments of medical supplies and food to famine and disease-ridden areas of the world.

Every year in the U.S. some 43,000 people die in car accidents. So why is the speed limit not 5 mph to save these lives?

In Italy, one estimate suggests 20 percent of small restaurants, usually family run, will not reopen even after the crisis ends. They have already lost too much.

The stoppages occurring now will forever change the world as we know it. Whole ways of life will, in one way or another, come undone or be changed for keeps.

The events of these days and months are likely to produce a domino effect of life-disrupting hardships very likely destined to last decades.

No one has yet been able to give me a reasonable answer to this question. No one.

What, please tell me, are the benefits of this onslaught of defensive, siege-like measures now in play?

We could instead quarantine the elderly and those most susceptible to infection. We could arrange for governments to support them and protect their jobs.

We could expand or establish businesses to support those in quarantine, with food deliveries, house services, even house visits by doctors (what a concept). The cost of all these services, and many more that could be created, would be minuscule compared to the cost of the policies already in place.

Children will suffer most as a result of the decisions being taken now, and that, to me, is the most abhorrent aspect of it all.

We are social creatures and in the end, we will not be denied.

During my walk home, I passed dozens walking their dogs, many riding their bikes, and many more jogging to music, all in what seemed to be to be a collective “to hell with quarantines” gesture.

And watching them gave me hope.